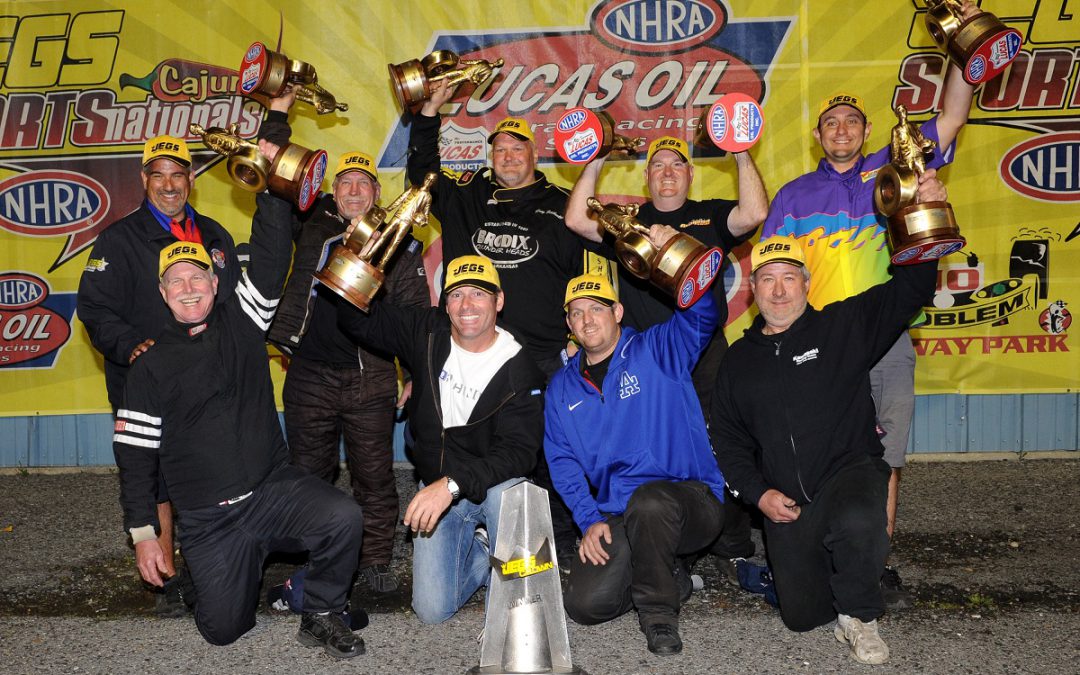 BELLE ROSE, La. (March 18) – Loosely translated, "Laissez les bons temps rouler" is French/Cajun-speak for "Let the good times roll," and that’s exactly what will happen this weekend when the JEGS Cajun SPORTSnationals returns to No Problem Raceway Park in Belle Rose for the 11th straight year.

There will also be numerous specialty races including the Moser Shootout, and the "King of the Bayou" event for drivers in Super Comp, Super Gas and Super Street, plus a very special "Hemi Chootout," so named to honor the memory of longtime Super Stock racer and Louisiana native Tim Hebert.

Additionally, the SPORTSnationals series will feature heads-up class racing in Stock and Super Stock; National event champion points; National event contingency payouts; $400,000 cash and contingency postings; and a host of special features, some of which will be unique to each of the events.

Last year, Division 1 racer Steve Szupka pulled off a rare feat when he claimed wins in both the Comp and Stock classes. Szupka joined Tommy Phillips as the only drivers to "double-up" at the prestigious event. Szupka was joined in victory by Anthony Bertozzi, who claimed a JEGS Cajun SPORTSnationals title for the second-straight year when he won in Super Stock. Other champions were Greg Brotherton (Super Comp), Ryan Herem (Super Gas), Ray Dew (Super Street), PJ Vicari (Top Dragster), Allen Firestone (Top Sportsman) and Mike Voss (Sportsman Motorcycle).

Those who are fortunate enough to win at the 11th annual JEGS NHRA Cajun SPORTSnationals will be in the running for the coveted JEGS Crown trophy. The prized award is a special trophy handcrafted by Dan Dreisbach of Naked Sculpture, and is awarded to any driver who can win the same class in two of the three JEGS SPORTSnationals events in a given season.

Among the many special events on tap at this year’s event will be the Moser Sportsman Shootout for racers in the South Central Division. On Saturday, March 22, a select group of racers in Super Stock, Stock, Super Comp, Super Gas, Super Street, Top Dragster and Top Sportsman will race in head-to-head competition for a share of more than $15,000. The top prize is $5,000 with an additional $2,000 awarded to the runner-up. The Moser Shootout races are unique because they pit drivers from different classes in a single eliminator, using a handicap start and a breakout rule on an eighth-mile in an effort to insure parity.

The other race that is sure to attract a lot of attention this weekend is the inaugural Tim Hebert Hemi "Chootout" for 1968 Dodge Dart and Plymouth Barracuda factory race cars. The event will offer a guaranteed purse of $12,000 with $7,000 to the winner and $3,000 to the runner-up. The event, which honors the memory of longtime Division 4 racer Hebert, is backed by Southland Dodge, Kent Services, Paillot Bros. Construction, Engines, Inc., Henson Family Dealerships, 3001 and No Problem Raceway. Hebert’s familiar orange and white ’68 Barracuda will be driven by his son, Rory, during the event.

While the on-track racing at the JEGS Cajun SPORTSnationals is second-to-none, so is the after-hours action which includes cookouts and other get-togethers that are designed to promote off-track camaraderie. To that end, No Problem Raceway Park continues its tradition of not only producing first-rate events for NHRA Sportsman racing, but also hosting a weekend-long party that includes plenty of Cajun food-fests and other Southern-style celebrations.