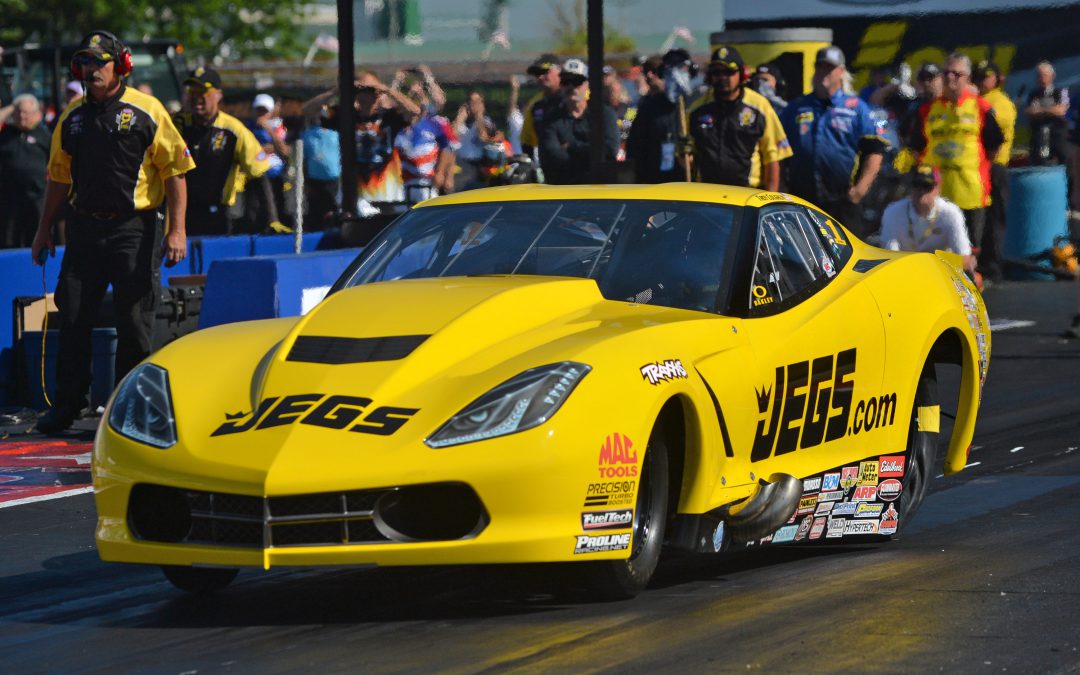 NORWALK, Ohio (June 26) – In a battle of Pro Mod superstars, Troy Coughlin Sr. came out on the losing end – this time – against Rickie Smith in the second round of the Real Pro Mod Association NHRA J&A Service Pro Mod Series race on Sunday at Norwalk.

Coughlin and Smith have won the last four NHRA Pro Mod championships, with the JEGS.com driver winning in 2012 and 2015 and Smith in 2013-14. Sunday in Norwalk, the race was over early as Coughlin red-lit for what he believed was the first time in his Pro Mod career.

"It's definitely more fun to beat him," Troy Sr. said. "We're good rivals, and we're always picking on him, and he's picking on me. We're going to get him next time; it's our turn."

Coughlin has been solid on the Christmas Tree this season, but he left .001 seconds too soon. Another hundredth of a second later, and Coughlin would have been racing in the semifinals.

But two things conspired to affect Coughlin. First, Pro Mod drivers picked up their game at Norwalk, and a rules change had crew chief Steve Petty and the JEGS.com team looking for elapsed time. They found it in the launch of the car, which likely contributed to the red light.

"All these guys can hit it at any given time, so you have to go up with you’re A-game all the time," Troy Sr. said. "We did. We had a faster car, and the driver was up for it. We were just a skosh too quick. Our normal reactions times are between .025 and .050, but here, there was one double-oh and a bunch of teen lights.

"We've done some stuff to the car to help it accelerate because with the rule change, we lost close to 270 horsepower. We've got to try and find it somewhere, and we found some in e.t., and it's picking the reaction of the car up, too. We'll regroup."

Coughlin and the JEGS.com team will have plenty of time to regroup and work on their Corvette, as the next Pro Mod race is the U.S. Nationals in late August.

"I'm proud of all these guys. I'm proud of our whole company, JEGS.com. We had a lot of associates at the race, and I wish we could've given them a better race, but as they used to say in Cleveland before winning the 2016 NBA championship, 'Wait 'til next year.'"

That's the sentiment held by Troy's brother, Mike, and son, Troy Jr., after the Norwalk race. Mike qualified No. 22 but lost in the second round of Top Dragster to Andy Johnson. Coughlin's package (dial-in plus elapsed time) was .321 seconds, while Johnson's was a tick better at .295.

Troy Coughlin Jr. exited early in both Super Comp and Super Gas. The Super Comp dragster lost in the second round to Justen Moser, while the JEGS.com Super Gas roadster fell in the first round.

"I'm struggling with (the dragster) on the Tree," Troy Jr. said. "We think we have a couple mechanical issues that are slowing me down. There's something that we haven't really gotten used to or found.

"The roadster's been great. I fouled up the finish line a little, just getting there too quickly. What do you do? We'll go to the next one and try again."

Still, Troy Jr. echoed the sentiments of his family when he talked about racing in his home state.

"The expectations are probably higher than normal mentally because it's more exciting to do well and win," Troy Jr. said. "It's kind of an extra bummer not to do well at home. But it's nice see everybody come out, and our fans get to see exactly what we do. It makes it fun."