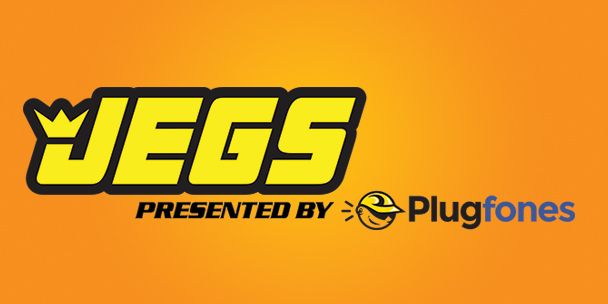 “The NHRA J&A Service Pro Mod Drag Racing Series continues to grow and the chance to race four-wide for the first time in 2017 is something everyone is looking forward to,” said Brad Gerber, NHRA vice president and chief development officer. “JEGS.com and Plugfones are great partners for the Pro Mod series and have been instrumental in its development.”

In 1960, Jeg Coughlin Sr. founded JEGS as a small speed shop. It has grown into high-performance powerhouse that includes a race team – Team JEGS, 250,000 square foot warehouse, retail store, mail order, and website. The 350 plus employees at JEGS still strongly believe and practice our simple business philosophy. Customer Care is #1.

“We are very happy to bring the first-ever four-wide Pro Mod race to the fans along with our great friends at Plugfones,” said Troy Coughlin, one of four brothers that owns and operates JEGS High Performance. “As a Pro Mod racer myself, I can tell you we are super excited about racing four-wide. I truly believe the fans are going to love it. It’ll be so cool to see four Pro Mod cars ripping down zMAX Dragway at the same time.”

Formally established in 2012, Innate Devices designs and distributes innovative audio products from its company headquarters in Springville, Utah. The revolutionary flagship product “Plugfones” combines earplugs and earbuds while providing ANSI-certified hearing protection with top-quality audio for our customers. With nearly one million units sold, Plugfones has become the go-to source for anyone working, racing or enjoying life in loud environments who wants the benefit of audio while protecting their hearing.

“In 2011, the idea for Plugfones was born under the lights during a night session of NHRA drag racing,” said Plugfones founder Shawn Knudsen. “We are very excited to embark on a partnership with JEGS.com to offer our ‘Earplugs with Music’ to the greater racing community.”

Featuring the world’s fastest and most unique doorslammer race cars, the NHRA J&A Service Pro Mod Drag Racing Series offers something for every kind of hot-rodding enthusiast. The growing and competitive class is highlighted by historic muscle cars, like the ’67 Mustangs, ’68 Firebirds and ’69 Camaros, as well as a variety of late model American muscle cars. With more than 3,000 horsepower, the suspended door pro mod cars travel the quarter-mile in less than six seconds at speeds exceeding 250 mph.

The 2017 NHRA J&A Service Pro Mod Drag Racing Series is showcased in a 12-race schedule that includes stops at several NHRA national events across the country. Steven Whiteley won the season-opening race in Gainesville and Steve Matusek winning the most recent event in Houston. All 12 races during the 2017 season will air on FOX Sports 1 (FS1) and FOX Sports 2 (FS2).