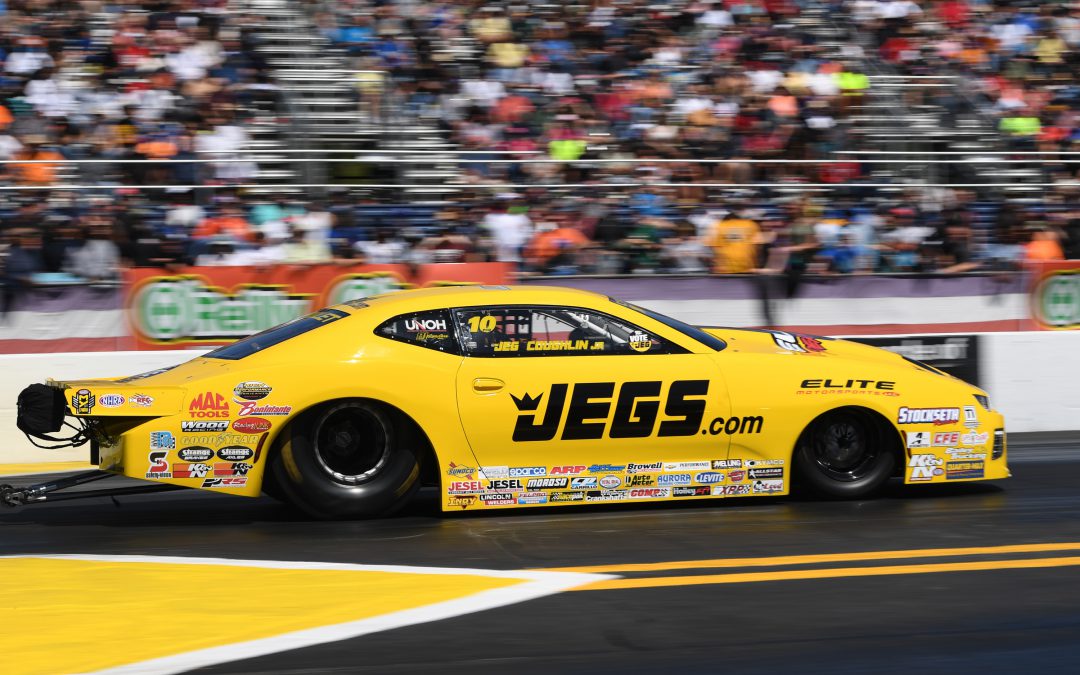 GAINESVILLE, Fla. (March 19) — Jeg Coughlin Jr. was expecting big things from his JEGS.com/Elite Performance Chevrolet Camaro Sunday at the 48th annual Amalie Motor Oil NHRA Gatornationals, but perhaps his tune-up was a little too aggressive as he overpowered the racing surface in the quarterfinals and lost to Greg Anderson.

"Looks like we had way too much power for the track and the conditions," Coughlin said. "We certainly didn’t expect that. We fought some issues in Q4 and came back in E1 and had a similar situation but got by the round with that .52. We should have run in the high .40s in Round 1 without question and that could’ve changed the fate of the day but shoulda, woulda, coulda gets you nowhere.

"The left lane not quite as good there initially for the Pro Stock cars and although we thought we were set-up well for some good transfer and to get the car to roll out a little bit it just kinda took the tire off and I was just along for the ride for a couple of gears. I probably had it in third gear by the time I passed the tree and that’s obviously not going to work. I was just trying to get the car down the track. You don’t know what your opponent is going through at the time, but about third gear I saw Greg whiz by and it seemed like mine was getting ready to turn over on its' lid so I decided it was enough."

Up until then the race weekend was going swimmingly well for the six-time world champion. He earned the fourth position on the elimination grid, marking his best qualifying session since the summer of 2015, and breezed through a tenth-of-a-second opening-round race against Kenny Delco, winning with a 6.521 at 213.33 mph to Delco's 6.584 at 208.84 mph.

"It was a good weekend," he said. "We had our best qualifying effort at No.4. The team has really come together well and we are making great, great horsepower, which is a key ingredient in successful Pro Stock racing. That’s going to show us where our next opportunities are as we come further into the season.

"We are a team that wants to challenge for the championship and we will do whatever it takes to sort out our opportunities and make them strengths and be better on the next game day. It's time to see if we can win some races."

The entire Elite Motorsports team plans to test prior to the next national event, the 18th annual Denso Spark Plugs NHRA Nationals, which takes place March 31-April 2 at The Strip at Las Vegas Motor Speedway.

"We’ve been running the wheels off these cars," Coughlin said. "We've done more testing than we’ve ever done in our careers. It’s extremely tight out there right now and this is a new program for Elite Motorsports. Yes, we ran with Vincent (Nobile's Chevrolet) last year and had some great data from his program but a lot of things have changed since 2016. We are making a lot more horsepower, the cars are just different, shocks are different, etc, etc. Just a lot to work on but we will work on the spots that need it and go from there."