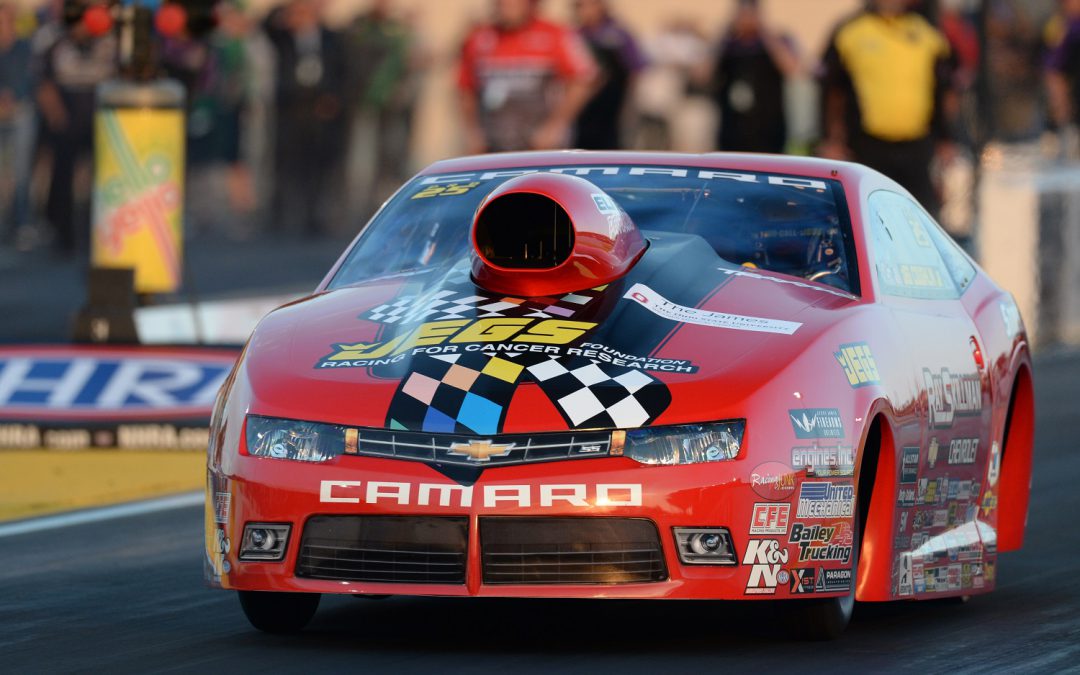 Coughlin, driving the Stockseth Racing/Elite Motorsports Chevrolet, sped to a track-record elapsed time of 6.501 seconds at 212.59 mph to snare the provisional No. 1 qualifying spot for the NHRA Northwest Nationals on Friday at Pacific Raceways.

"It feels fantastic to be back on the track," Coughlin said. "After day one, to be sitting on top feels very special.  With a great team behind me like the Elite Performance, led Richard Freeman, and Mark Stockseth and the entire team, they deserve a lot of credit. I feel fantastic behind the wheel of their Chevy Camaro."

Coughlin's track-record pass came in the second qualifying session and broke the record of 6.526 seconds set by Mike Edwards in Aug. 2013. He was No. 4 after the first session, but crew chiefs Rick and Rickie Jones and Mark Ingersoll made some adjustments, and Coughlin was able to pick up precious ticks of the clock.

"We were real loose through the middle of the track, and I suspect a lot of the Pro Stockers were," Coughlin said. "We were able to able to fine-tune a few things with the chassis, and Mark and Rick and Rickie Jones did some fine tuning, and the car was much, much better. I let the clutch out on that second run, and it felt phenomenal."

The car drifted slightly, but Coughlin gently pulled it back in the groove and was able to jump to the top spot. But can it stay there through two more sessions Saturday?

"Good enough for the No. 1 spot going into Saturday," Coughlin said. "In all honesty, the weather tomorrow morning is likely going to be cooler, the track's going to be filled in much better. The 6.50 likely doesn't stand a chance of staying up on top.

"We'll sleep on that, be real proud of our efforts today, but know that we're going to come out and swing hard tomorrow."

Coughlin returned to Pro Stock last weekend in Sonoma as a teammate to 2014 World Champion Erica Enders. Coughlin, a five-time Pro Stock champion, is slated to race three times in 2015, including here and Indianapolis.