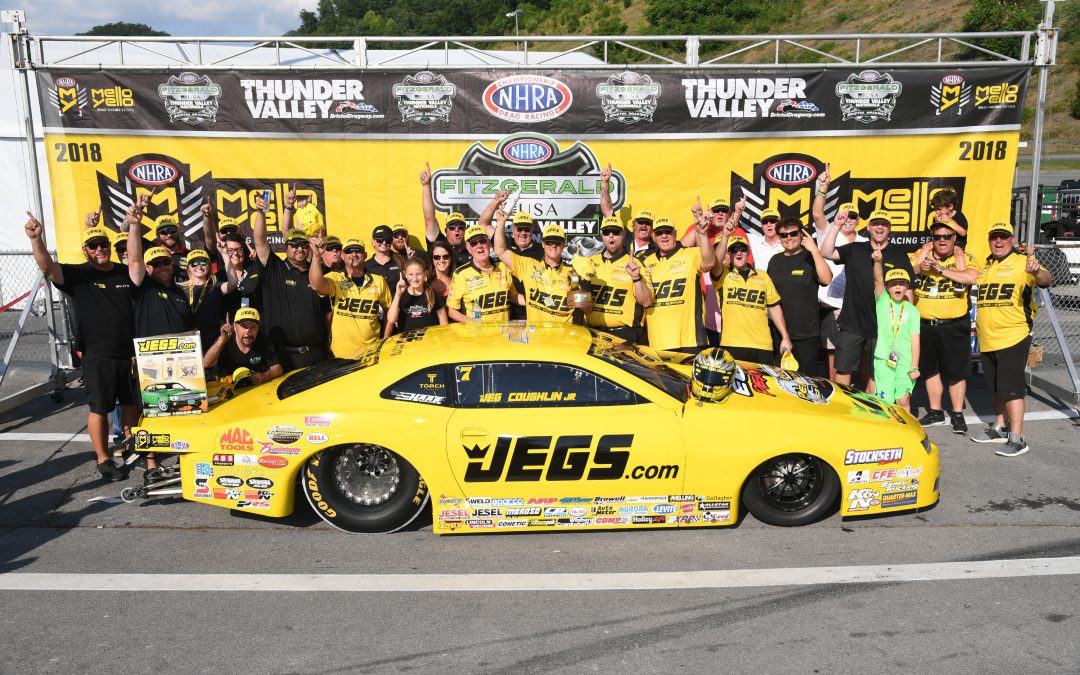 BRISTOL, Tenn. (June 17) – JEGS.com driver Jeg Coughlin Jr. has been on plenty of hot streaks during his legendary career, but not many like this one.

With a victory in the Fitzgerald USA NHRA Thunder Valley Nationals on Sunday at Bristol Dragway, Coughlin has scored three wins in the last three weekends. He won in Pro Stock in Chicago, followed that up with a Super Comp win in Richmond and extended the streak to three with the Pro Stock victory here.

"That has a nice ring to it," Coughlin said of winning three weekends in a row. "Without question, since we've made some transitions within the (Elite Motorsports) team, we've been really fast – Erica (Enders) and I both. It feels great. Getting a Super Comp win in Virginia was really rewarding as well, and I'm very proud of that because it's some tough racing.

"To win here at Thunder Valley is fantastic."

The victory was Coughlin's 60th in Pro Stock, and he joined Warren Johnson (97), Greg Anderson (90) and Bob Glidden (85) with at least 60 wins in the category. He's the seventh driver in NHRA history to reach the 60-victory mark in one class.

His recent win streak comes on the heels of a long four-year drought in Pro Stock that ended in Chicago.

"There were some trying times," Coughlin said. "I've been blessed with an amazing career and have worked around some of the brightest crew chiefs, engineers, engine builders, car chiefs, etc. We've got a lot of great things to show for it.

"But No. 1 with us is our family; we're very close and we have a great time together, on and off the race track. I work with my three older brothers and all their families back home in Delaware, Ohio at JEGS.

"I was guilty of saying, when we won Chicago, it almost felt like my very first win ever. … Our competitors and a lot of our fans have seen what we've traversed through, and it's been fun to see that tide turn for us. We've always hoped and dreamed of being in this position."

Coughlin, the No. 2 qualifier, started his day with a solo pass in the first round. Tommy Lee crashed Saturday and couldn't make the call. Coughlin made a run of 6.719 seconds at 205.10 mph to get lane choice for Round 2 against Chris McGaha.

Coughlin's semifinal race was over before he started as Drew Skillman went red by .025 seconds.  Coughlin, who had a .025 light, was going to be tough to beat with a run of 6.750 at 204.51 mph that got him lane choice in the final against Anderson.

"The Elite team really gave me a great car," Coughlin said. "We were top two in two of the sessions, so we were really great from the time we unloaded, and we had a competitive car today. They were really pulling their hair out this morning since this was the third hot day – 130-, 140-degree track, which is really uncharacteristic. It definitely tested their wits, and they had some great setups in the car."

Coughlin Jr.'s bid for back-to-back wins in Super Comp ended in the second round here, as he lost to Michelle Furr.

Older brother Troy Coughlin Sr. had a great .016-second reaction time in his JEGS.com Ford Mustang Pro Mod, but he had to get out of the throttle early in a first-round loss to Mike Janis.

His son Troy Coughlin Jr. took the JEGS.com Super Comp dragster to the fourth round, while he fell in the second round of Super Gas.