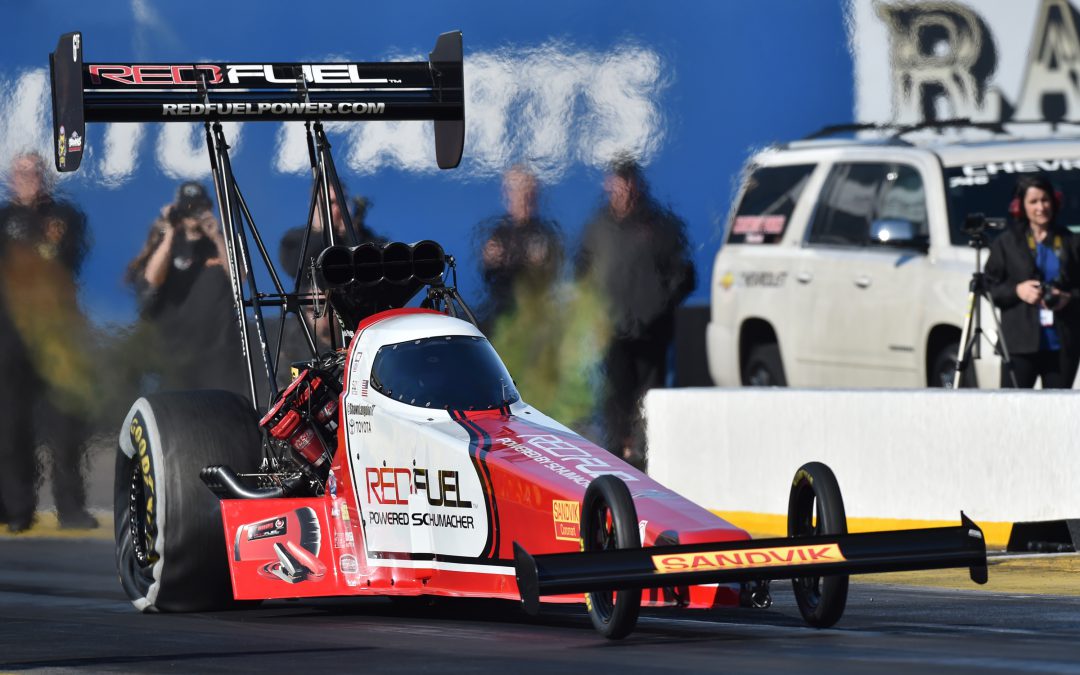 "It was really wild," Troy Jr. said. "It's extremely fast, and it's very aggressive acceleration at its finest. I've always thought power and acceleration brings great fascination to one's mind, and it truly is a wild, wild feeling the way this car pulls from about 100 feet on."

Troy Jr. began working on his Top Fuel license last November, with past Top Fuel champion Del Worsham as a mentor. Weather prevented Troy Jr. from finishing the process in 2015, and he wanted to earn the license as soon as possible.

Don Schumacher then offered Troy Jr. the chance to complete his license in a DSR dragster during NHRA Nitro Spring Training this week, and Troy Jr. jumped at the chance.

"Thanks to Don Schumacher and Don Schumacher Racing and all the guys on the Sandvik/Red Fuel team," Troy Jr. said. "They worked their butts off to get this thing ready and getting it staged and checking everything. It's extremely impressive how well they all worked together.

"And I have to thank Don for the opportunity to finish my licensing process. That's been awesome."

Jeg Sr. raced Top Fuel and Funny Car during his Hall of Fame career as a driver, but no other Coughlin family member had driven a nitro car since. Troy Jr. and his grandfather have a special relationship, and Jeg Sr. watched with pride as Troy Jr. made his runs Thursday.

"Pappy was pretty stoked," Troy Jr. said. "He had never seen any of his family run a nitro car – other than himself. He and I have talked about it a long time, and it really was an honor to have him there, not only as a grandfather but as a member of the history of the sport."

NHRA President Peter Clifford was one of the first to call and congratulate Troy Jr., who was appreciative of the call.

"That was really special for us," Troy Jr. said.  "It's really cool that the sanctioning body really cares about the youth in the sport. Peter is working really hard at getting our sport to shine, and I have to credit Peter and all of the NHRA staff."

Troy Jr. won the Rookie of the Year Award in the NHRA Pro Mod Series in 2015, but he'll focus on winning the Super Comp and Super Gas national championships this year. Plans for racing in Top Fuel are up in the air.

"Now, we'll see what our opportunities are to go race," Troy Jr. said. "A majority of the 2016 season will be Sportsman racing with (crew chief) Justin Beaver and the JEGS.com guys. We'll look at our opportunities for what lies ahead for us in the Top Fuel program."