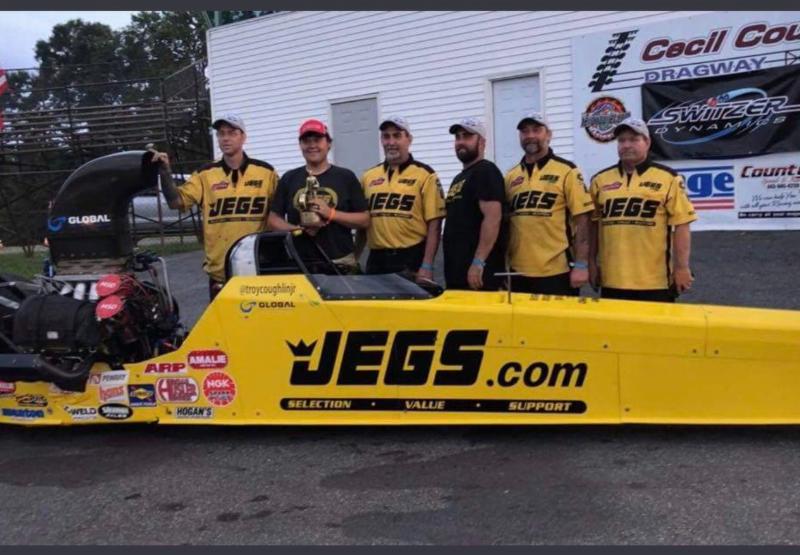 RISING SON, Md. (Aug. 19) — Troy Coughlin Jr. scored his third Top Alcohol Dragster victory of the year at this weekend's Northeast Shootout at Cecil County Dragway. The win adds to an impressive opening season in the class for Coughlin, who also collected the trophy at the Division 3 race in Norwalk, Ohio, and a $20K bracket race in Jackson, S.C.

"All credit to the guys at McPhillips Racing," said Coughlin, the son of three-time and reigning Pro Mod champion Troy Coughlin. "To come into this class as a rookie and get to work with a top organization like this is more than I could have ever asked for.

"Rich (McPhillips) and the rest of the crew work with so much passion for this sport. They remind me of the associates we have at JEGS and guys like Steve Bryson at Global Electronic Technology. When you find something you're passionate about everything comes together more often. To have three wins already is a testament to these guy's dedication."

Racing some of the best in the sport, Troy Jr. and team had to beat Thomas Fox and Dan Mercier to get a chance at Doug Foley in the final.

"The race against Fox was scary because the car went out to about 200 feet and shook the tires really hard," Troy Jr. said. "I pedaled and got back into it as quickly as I could and fortunately he had issues as well and shut off. I was able to win with a 5.606 at 262.59 mph.

"Against Dan the car was absolutely perfect. I got a jump at the light and it just went straight down through there. When I heard we ran a 5.258 at 275.45 mph, our best pass of the weekend, I just shook my head in amazement at my team."

That win set up a final with veteran Foley, the event's No. 1 qualifier.

While Troy Jr. was celebrating his third trophy run of the year, Uncle Jeg Coughlin Jr. was sent home early from Pro Stock action at the Lucas Oil NHRA Nationals in Brainerd, Minn. After qualifying eighth with a 6.623 at 208.23 mph, Jeg Jr. lost traction in his JEGS.com/Elite Performance Chevrolet Camaro during a Round 1 race against Greg Anderson and was forced to surrender.

Jeg Jr. will take a weekend off before competing in the 64th annual Chevrolet Performance U.S. Nationals, the sport's oldest and most prestigious event.