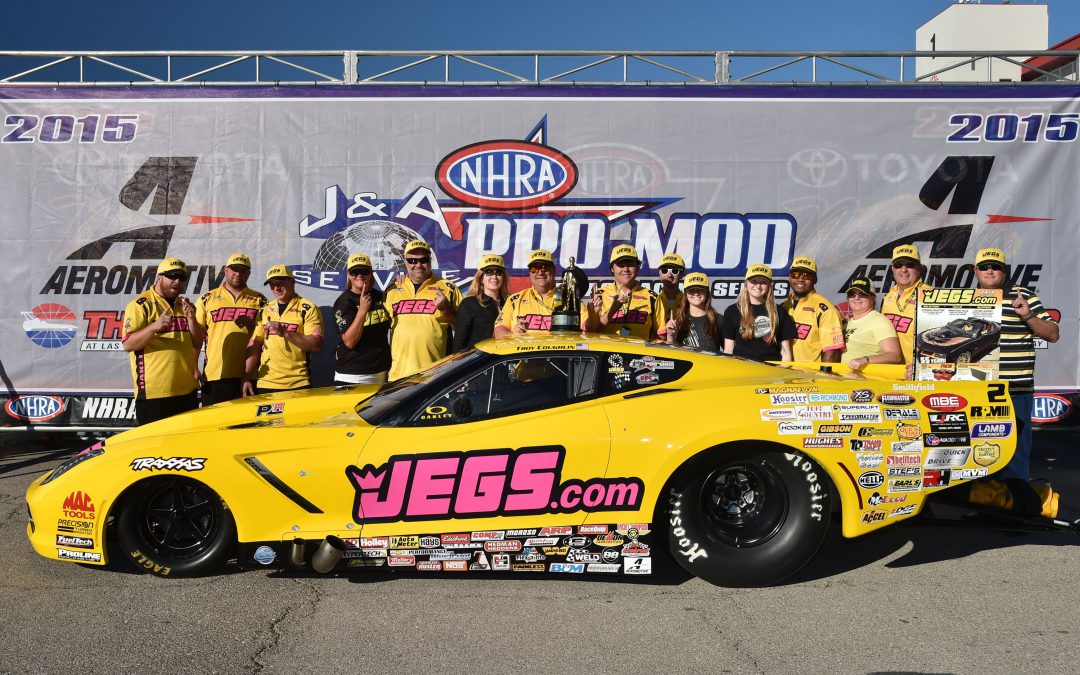 LAS VEGAS (Nov. 1) – Jewelers will have to find a spot for another stone in the Coughlin Family ring.

The championship was Troy Sr.'s second in the Pro Mod Series, following up his 2012 title. It was also the ninth for the famed Coughlin Family of Delaware, Ohio.

"(Brother) Jeg built a ring for us back in 2000 when he won the first professional championship," Troy Sr. said. "He put a diamond in it, and every year one us wins a championship, we add another stone to it. It's really kinda cool. I just sent a text back home and said, 'Guys, girls, mom, dad, we've got to collect the rings and the pendants to add another stone.' I sent an emoji with eight stones for nine championships. It's exciting."

Troy Sr. came into the race weekend 28 points behind points leader Mike Janis, but things worked in his favor. Troy Sr. scored an important first-round victory Saturday, and after Janis lost in the first round, the door was open for Troy Sr.

Sunday, Troy Sr. stepped up to beat Sidnei Frigo with a pass of 5.867 seconds at 252.85 mph in the second round to take over the points lead. And when Bob Rahaim, who was third in the standings, lost to Rick Snavely, Troy Sr. clinched the championship.

"It seems like it just happened yesterday that we won the first title," Troy Sr. said. "Boy, what a sweet deal. What can I say about all the guys on this JEGS.com car. It's pretty exciting. To come back and do it again, that doesn't happen very often. As tough as this class has gotten over the last couple years, it makes it that much sweeter, for sure."

The JEGS.com crew  of crew chief Steve Petty and crew members Justin Beaver, Brandon Stroud, Kyle Pettis and Mike Rees rose to the occasion, providing Troy Sr. with a championship-winning Corvette. He needed one against Frigo, the No. 4 qualifier.

"We had a fast racecar, and we had a tough competitor in the second round," Troy Sr. said. "We just made a little bit better run than they did at that point. Steve and these guys did a great job giving me a race car to run in."

"We got to the semifinals and knew we should run about an .88, .89," Troy Sr. said. "That's what we were shooting for. Farber is a pretty good racer, and those guys could be fast at any time. We just tried to give it a little bit of a tuneup, but both cars got a little bit loose. It spun the tires and hiked the front end back up. I wished it was going straight – I think we could've got away with it. But it was still fun to drive."

And, of course, it was fun to win another championship.