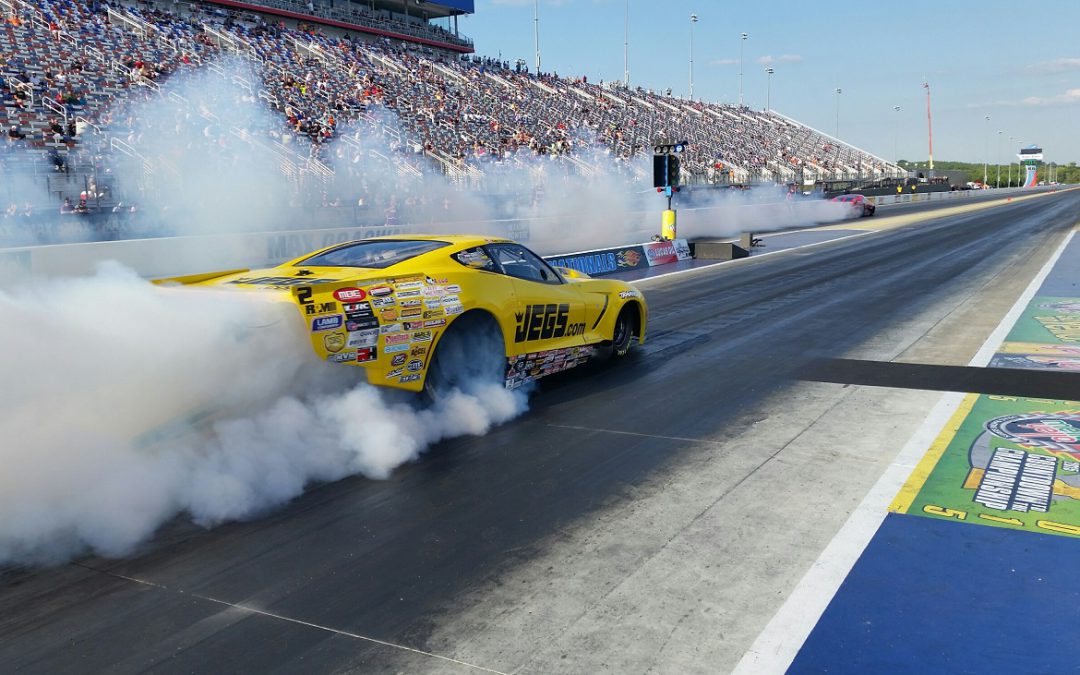 CHARLOTTE (Sept. 20) – JEGS.com Pro Mod driver Troy Coughlin Sr. was spectacular in his second-round match with Eric Latino in the J&A Service Pro Mod Series race Sunday at zMax Dragway – but not the kind of  spectacular he wanted.

Troy Sr.'s JEGS.com Corvette caught fire short of the finish line, and he had to abandon ship as the NHRA Safety Safari put down the flames. Troy Sr. was able to escape unharmed, but the damage to the car was significant.

"We were a little more spectacular than we wanted," Troy Sr. said. "If it gets us some footage on TV, I guess that's a plus. But we've probably got $200,000 worth of damage that we've got to get fixed up. We'll work on it. We're not done fighting, for sure."

Troy Sr. is second in the Pro Mod standings after taking out points leader Mike Janis in the first round Saturday. Troy Sr. hoped to climb to the points lead Sunday, but his pass of 6.012 seconds at a slowing 231.08 mph wasn't enough to beat Latino's 5.929-second run at 245.23 mph.

"It was on a good run," Troy Sr. said. "It was on a low .90 run, maybe high .89. It was going along pretty good, and then it kinda laid over and caught on fire. You could see the whole engine compartment on top on fire, but I kept my foot in it a little bit further. I could see him starting to go around me a little bit, so I let off, got on the chutes and pulled the fire bottles.

"I got it stopped over toward the wall because the last thing you want to do is tear the track up or tear the car up. We're trying to assess the damage and see what labor it's going to take to get it back in line."

The Safety Safari was on the scene as Troy Sr. brought the JEGS.com Corvette to a stop, and he was able to escape the hot cockpit.

"The Safety Safari is second to none," Troy Sr. said. "They were there before I even got the car stopped. We have them on our prayer list every night, and we need to say a couple extra prayers for them tonight."

Despite the loss, Troy Sr. made progress in the Pro Mod championship chase.

"It was good for the points, and we picked up a round," Troy Sr. said. "We've been in worse conditions to win the championship. We're a championship-caliber team. All the guys at Pro Line have given us the power to do it. We just had a hiccup today."