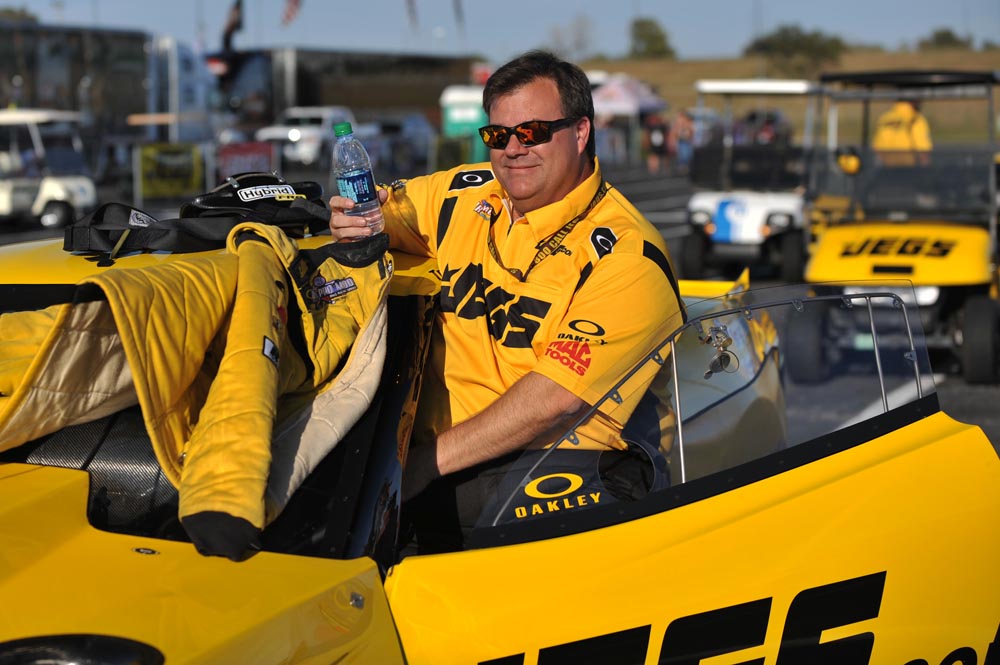 Troy Sr. got the important victory during the AAA Insurance NHRA Midwest Nationals when Steve Matusek went red. Troy Sr. wasn't aware of the red light and made his pass, but his JEGS.com Corvette proved to be a handful.

"It was running really good in qualifying," Troy Sr. said of his No. 4 qualifying spot. "Something happened in the first round, but we don't know what the problem is. The car just didn't make a good lap, so the guys are taking it apart and trying to do a once-over from bumper to bumper and try to see if we can find what's wrong.

"It was very odd for the thing to do what it did to that degree. That's Pro Modified."

"I didn't see him go red," Troy Sr. said. "When you're in the heat of the battle, it's tough to let off the gas. You're buzzing down through there and you don't see him, you're trying to do everything you can to try and get the car back in the groove.

"The car took off and made a hard right-hand turn, harder than it's ever had in a long time. You're rolling out to about 50 percent throttle, and you're trying to get it back in the groove. You don't see the other guy over there, so you get back to about 70 percent throttle – and the thing's just frying the tires out there. It was pushing you back toward the wall. It was just a mess.

Troy Sr. came into the race second in the Pro Mod points standings, 46 behind Mike Janis. Janis also won Saturday, meaning Sunday will be an important day in the chase for the Pro Mod championship.

"It's a big day for a bunch of us," Troy Sr. said. "We're just going to keep picking at this thing one round at a time. We're going to get the car fixed and get it to go straight so it can put the power to it. We've got decent power, but we've got to be able to put it to the ground. I know all the guys on the JEGS.com team and all the guys at the shop piecing this car back together at the last minute to get it here have worked really hard. We've made good strides, but we had a bad first round – but a lucky first round. We'll take it. We'll keep picking at it and let the points compile."

Troy Coughlin Jr., who had qualified No. 3, had an unfortunate parts failure that caused him to lose his first-round race against Gerry Capano. A bolt that holds the transbrake button came loose during Troy Jr.'s staging procedure, and when he went to stage the car, it lurched forward and caused a red light.

Mike Coughlin won his first-round match with J.R. Lobner in Top Sportsman before falling in the second round to Glenn Butcher. Coughlin was quicker on the Tree (.012 to .028), but Butcher's .041 package was a tick quicker than Coughlin's .051.