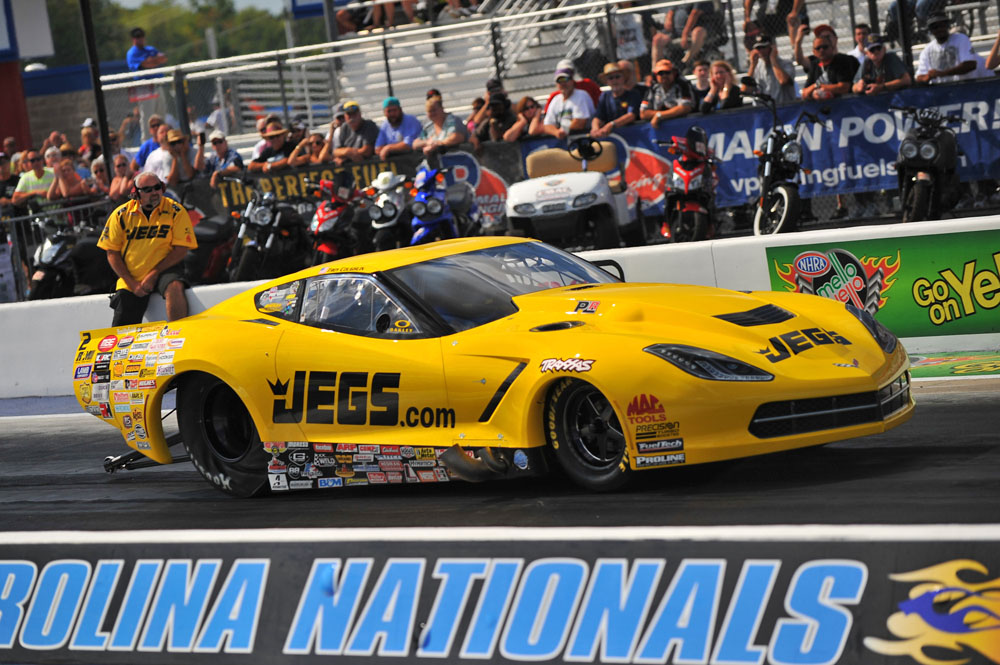 Troy Coughlin Sr. knocked off points leader Mike Janis in the first round and in the process tightened up the top of the Pro Mod standings.

"They're all important, but when you get down to the end of the season and everybody's chasing points, they get bigger," Troy Coughlin Sr. said. "There are five or six guys who are chasing the championship, and the guy on the top had to go out early."

That happened Saturday when Janis, the No. 4 qualifier, didn't launch after staging against Troy Coughlin Sr. The JEGS.com Corvette made a solid run, 5.935 second at 253.99 mph, to advance to the second round.

"To take Janis out on the first round is a big deal," Troy Sr. said. "That was a definitely a big deal for us."

Unofficially, Troy Coughlin Sr. moved to within 36 points – less than two rounds of eliminations – of Janis. Should Troy Coughlin Sr. win two more rounds as elimiantions continue Sunday, he would take over the points lead.

The clutch victory came after Troy Sr. needed a good pass in the final qualifying session to make it into the field. He ended up qualifying No. 13 with a pass of 5.945 seconds at 252.19 mph.

"We were lucky enough to get this thing fixed up for the last qualifying run to get in the show," Troy Coughlin Sr. said. "That was getting kinda scary for a while, but (crew chief) Steve (Petty) and the guys did a great job, and we got it in the field. What can I say about those guys? Justin (Beaver), Brandon (Stroud), Kyle (Pettus), Mike (Rees), Steve, T.J. and all the guys in the shop – Rick Rossiter, Greg Cody, Tony Collier – they go a great job of getting all this lined up."

Troy Coughlin Sr. faces Eric Latino in the second round Sunday after Latino beat Troy Coughlin Jr. in the first round.

"Qualifying was great," Troy Jr. said. "The thing made great runs, but we just got on a challenging race track. We just didn't quite make it through the shake zone, so it was one of those rounds where you count your blessings, look at your data screens, analyze what you've got and try to make it better."

Both Coughlins enjoyed racing at zMax, one of the finer facilities in drag racing.

"Marcus Smith, Christian Byrd and the entire staff here do a great job and treat all the competitors well," Troy Jr. said. "It's a treat to come here and race. Everyone, whether they live in Tahiti or in North Carolina, should come here and watch a race. It's a great place."