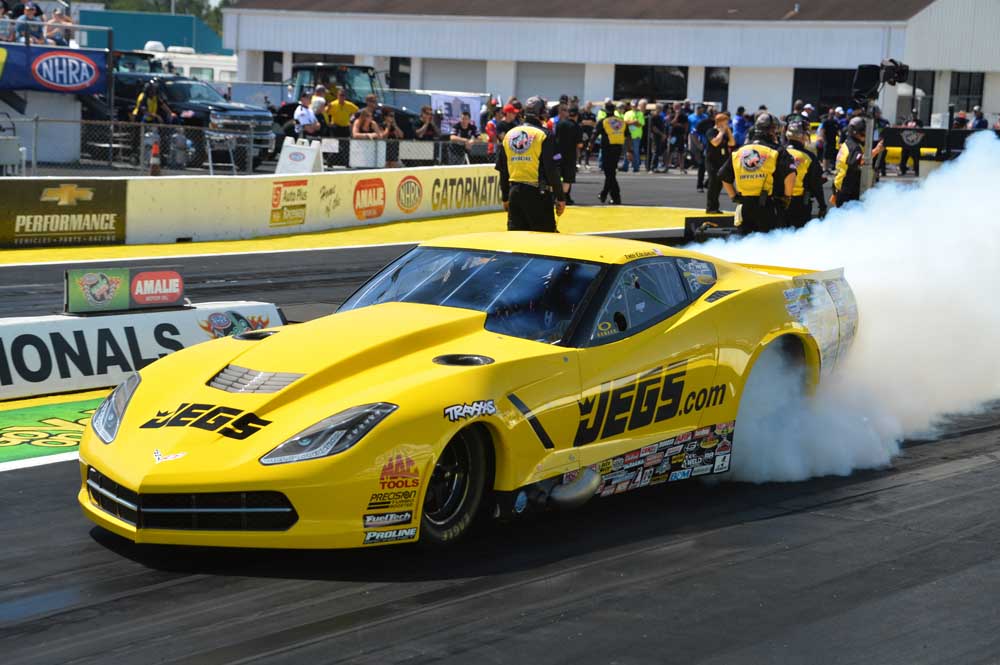 Both JEGS.com Corvettes experienced rare failures in their second-round victories, creating a full-on thrash before the semifinals. Troy Sr.'s new Corvette C7 made it to the staging lanes just in time, but after getting a .024-second edge on the Christmas Tree with a .023 light, his pass of 6.196 seconds at 237.84 mph couldn't hold off Bob Rahaim's 5.996 at 243.72 mph.

But T.J.'s Corvette wouldn't move after he put it in gear to do a burnout, giving Pete Farber an easy win.

"That's the best Gainesville we've ever had," Troy Sr. said. "We're leaving here with T.J. in third and myself in fourth. We've got a new car with seven runs on it, and we'll just go pick on it a little more. T.J.'s car, that thing is a weapon."

T.J. made his professional debut in Gainesville and performed well, qualifying No. 2 and getting two round-wins. He got a second-round win Sunday on a red-light by Billy Glidden, but the transmission and rear end broke during the run.

"The whole JEGS.com team — (crew chief) Steve Petty, Justin Beaver, Kyle Pettis, Mike Rees — worked really hard, and my Uncle Mike jumped in with his guys — Greg Cody and Tony Collier," T.J. said. "Everyone had their hands on deck, and they did a fantastic job. To get them working like they did is impressive. I can't do it without these guys. I would have zero chances without them."

The JEGS.com team even got some help from Pro Mod drivers Danny Rowe and Steve Matusek.

"I see these hands coming that I've never seen before, and they're putting the doors on," Troy Sr. said. "I look back, and it's Steve Matusek. I'm like, 'Thanks, Steve.'

"We're blessed with a lot of friends, and this is a tight-knit group of racers. We would do anything for each other in a pinch.

"We've very seldom ever broke stuff. We just happened to break a transmission, rear end, and converter in both cars. We're equipped with the parts, but we never dreamed we had the issue with two cars. We'll reorganize a little bit and come back out swinging in Houston."

T.J., too, vowed to improve on his first pro weekend.

"You have to adapt," T.J. said. "You have no option in elimination rounds, so you have to be on point in every direction. I felt like I was lacking a little bit on the Christmas Tree the first two rounds. I feel like I'm getting it but I'm not. I need to go out and hit the Christmas Tree some more, watch more runs on the camera, and make some improvements.

"But all in all, the experience is a rush. It's a lot of fun. It's a different pace."