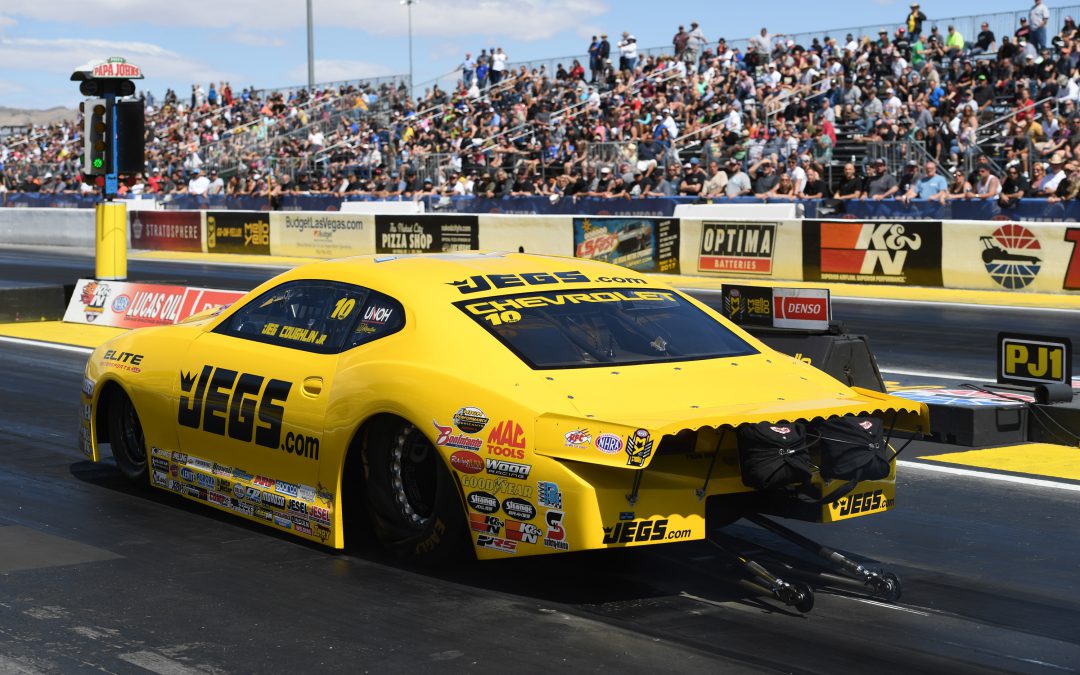 LAS VEGAS (April 1) — Not every driver in the Pro Stock category managed to make it down The Strip at Las Vegas Motor Speedway during Friday night qualifying, but those that did made an impact. Jeg Coughlin Jr. was one of the fortunate ones who made a pass just after NHRA officials decided to spray the racing surface and his impressive 6.652 at 206.92 mph in the JEGS.com/Elite Performance Chevrolet Camaro was enough to place him a season-best second on the elimination grid.

"We had a really good day of qualifying Friday," Coughlin said. "To earn the No. 2 spot and finish qualifying just five-thousandths of a second off the top spot is very encouraging for all of us at Elite Motorsports. We've been getting better and better each race and I don't think anyone in this pit is surprised. Still, it's nice to get I done.

"Today we were a little more sluggish both passes — we had a 6.722 and then a 6.695 — and it was basically a product of our starts. They just weren't as clean as we would have liked. We were a bit too conservative. But that's an easy fix; we'll just crank up the power for tomorrow and see if we can't turn on some win lights."

The first win light Coughlin will try to earn will come against part-timer Tom Huggins, who qualified 15th with a 6.829 at 199.85 mph. Although the two drivers elapsed times in their respective runs of record are quite far apart for drag racing, Coughlin says they will take nothing for granted come
race day.

"You have to treat every round like it's the most important one of the year because at that point in time, it really is," Coughlin said. "If we have problems and he sails down through there, the win is going that way.

"I think we'll be good. The guys have a really good handle on this Rick Jones chassis and we've personally had a ton of success at this racetrack over the years (with seven national event victories) so we're expecting good things. It's a matter of everyone doing their jobs, including myself in
the cockpit."