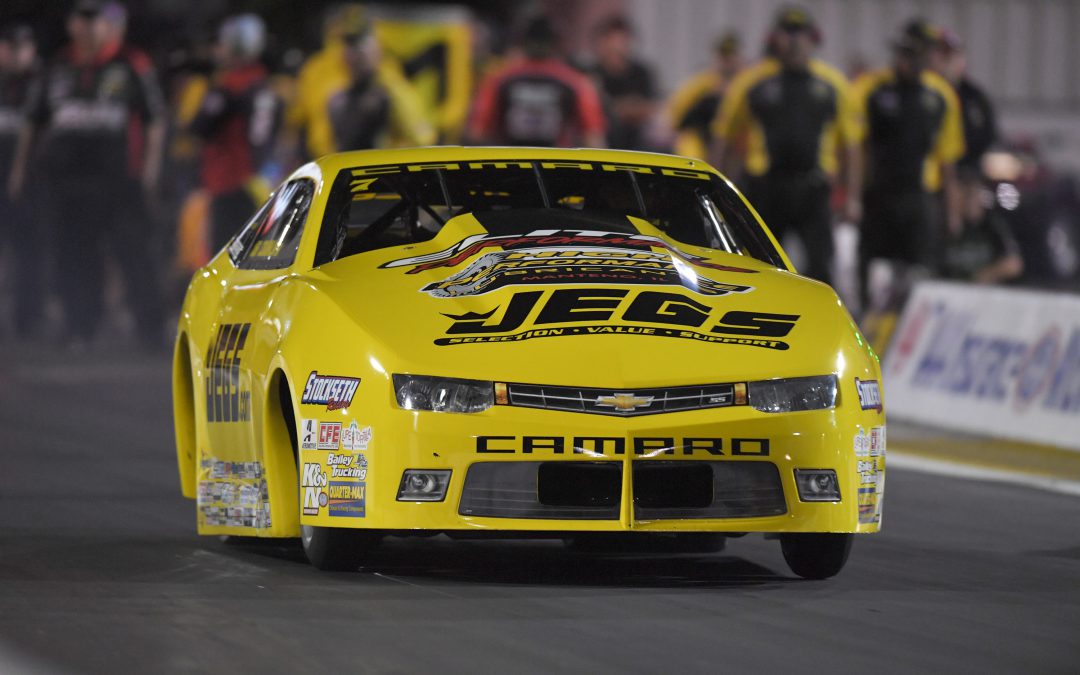 ST. LOUIS (Sept. 22) — The NHRA playoffs are the perfect time to shine and five-time Pro Stock champion Jeg Coughlin Jr. has been strutting his stuff in his JEGS.com Elite Performance Chevrolet Camaro since the Countdown to the Championship started one race ago. That trend has continued this weekend in St. Louis with Coughlin securing his third No. 1 qualifier honor of the season.

"This is the Countdown," said Coughlin, a three-time winner this season and a five-time victor at Gateway Motorsports Park. "All the stops have been pulled and we are really being aggressive in qualifying, much more so than we have been all season."

Coughlin's best run this weekend so far was the 6.496 at 211.76 mph he posted Saturday afternoon. He also carded a pair of 6.516s and a 6.551 during qualifying, good enough to keep him atop the field since the second qualifying session.

"It was close to Disneyland conditions for Pro Stock cars," Coughlin said. "We were here almost 24 hours in the same position with the 6.516 (from Q2 Friday) and really felt like today if the forecast was accurate, we could improve.

"Today we had a higher barometer, which is more pressure for the engine and also lower vapor pressure, which is less moisture in the air. Those two things alone we knew we were going to make more power and likely improve. I think we are one of the first to run in the 6.40s this entire season and to use that pass to get the No.1 spot feels great.

"That 6.49 was quite a shot. We felt really good about it. From inside the cockpit, I let the clutch out, the front wheels were up as I was dropping it into second gear, then third, fourth, fifth, about that quick, and it was just screaming the whole way. When Rickie Jones, my crew chief, came on and said we ran a 6.49 it made us all really happy and proud in front of this great crowd. Now we head into Sunday with great momentum."

As the top qualifier, Coughlin will open Sunday's eliminations against Mark Hogan, who anchored the Pro Stock field with a 6.769 at 204.60 mph. Hogan and Coughlin have not faced each other this year, with Hogan only qualifying for three other national events.

"Sunday is game day," Coughlin said. "That’s what we are here for. Qualifying is fantastic. It’s a great show and positions us for Sunday’s race and there’s no better place to start than first. So, we will be on our best behavior, drive aggressive and I’m sure Rickie has his aggressive pants on too."