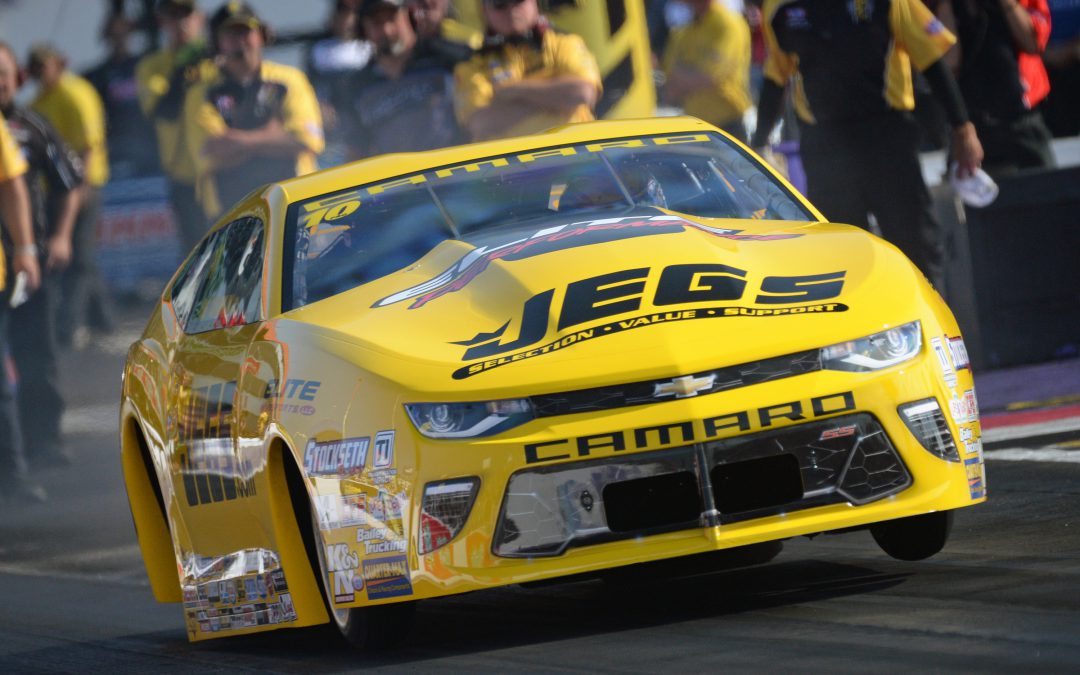 HOUSTON (April 22) — For the first time this year, someone other than Jason Line is the No. 1 qualifier in Pro Stock, as Jeg Coughlin Jr. secure his first pole since the spring Las Vegas race in 2014 with an impressive 6.557-second pass at 210.70 mph in his JEGS.com/Elite Performance Chevrolet Camaro.

This is the 21st time Coughlin will lead the field into race day and the third time he's done so in Houston. He was also the top qualifier here in 2007 and 2013.

"We are definitely pleased and honestly, after looking at today's weather, we weren't sweating about keeping the top spot too much," Coughlin said, alluding to the fact his run of record came on Friday night. "We thought there was an outside chance we would have to improve to stay in the No. 1 spot but even though the corrected air was a little bit better than it was last night, the track was just too warm."

With only 13 cars in the field, Coughlin's extraordinary effort earned him a first-round bye in Sunday's opening session of eliminations. He'll then face the winner of an opening round tilt between Drew Skillman (6.587 at 210.87 mph) and Chris McGaha (6.598 at 209.95 mph).

"Because of the odd amount of cars we will have a first-round single, which all but guarantees us getting into the second round," Coughlin said. "So we'll go out and see if we can't make a clean, aggressive run in the first round to set us up for a strong Round 2 race. Then we'll go from there."

Having another uptick in performance this weekend also fits into his plans.

"It's definitely not a huge surprise," the six-time world champion said. "We've gone through quite a transition over here at Elite Motorsports. We're in our fifth race of the new season and we have shown some real flashes of brilliance with elapsed time and speed. Now we are just trying to balance everything to get it all to happen at one time.

"Our goal coming into this weekend after we fixed some of the issues from Vegas was to make four good clean runs going into Sunday and see if we couldn't keep our heads on straight. That's exactly what we've done so I like where we are sitting. I think it's going to be fun day tomorrow."