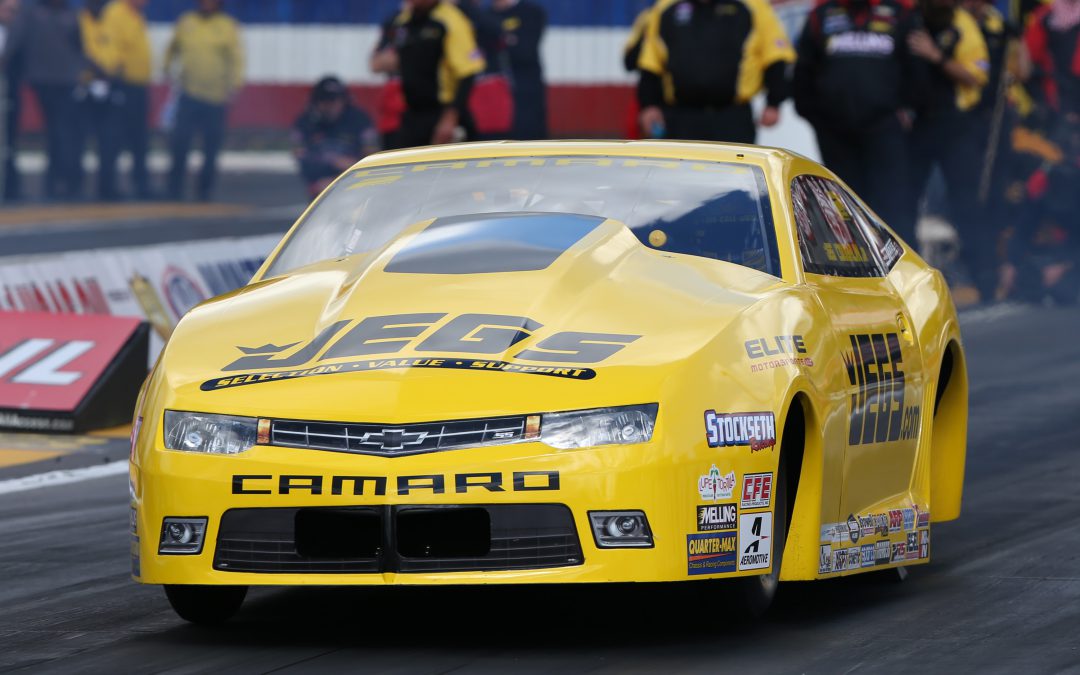 POMONA, Calif. (Feb. 9) — Jeg Coughlin Jr. has a fast racecar and he's ready to show the world his 2019 Pro Stock title aspirations are for real when eliminations begin Sunday at the 59th annual Lucas Oil Winternationals.

Coughlin qualified No. 9 with a 6.558 at 210.50 mph in his JEGS.com Elite Performance Chevrolet Camaro, but that wasn't his best pass of time trials. He actually went 6.544 at 211.46 mph in Friday's first qualifying session but the run was disallowed because his car was a tick under the minimum weight.

"All in all, I've got a great race car and I know I have a great team behind me and we are looking to get out tomorrow and showcase our efforts," Coughlin said. "We had a little misfortune following our Q1 run, which was disallowed because we were light on the scale. That's the first time in 20 years for something like that to happen. I guess we were just too close so it didn't pass.

"The next three sessions were good. We were fighting the car like a lot of the teams were through the middle of the race track just to keep it accelerating forward instead of spinning and we were getting a little better at it each run. We were seventh in the second session, fourth in the third session and probably in the top three or four of the last session, so we have a good, consistent thing going."

In Sunday's opening session, slated for noon PT, Coughlin will yield lane choice to Elite Motorsports teammate Alex Laughlin, who posted a best of 6.555 at 211.03 mph in qualifying eighth overall. Both Coughlin and Laughlin will have access to the data of fellow Elite Motorsports drivers Rodger Brogdon (6.522) and Erica Enders (6.528), who qualified first and second, respectively, on the grid.

"We've got five cars here and that yields a good bit of data for our collection of crew chiefs to look over after each session. Rodger's No. 1, Erica's No. 2, Alex is eighth and (Matt) Hartford is right behind us at No. 10.

"You'd rather not face a teammate in the early rounds but with five cars out of the 16 in the field running Elite Performance power, it's inevitable we are going to be packed in there and have to run one another from time to time. Either way, I look forward to our first game day of the year."

The big question mark is the weather as local forecasts call for overnight rain continuing through to the afternoon. It's also supposed to stay very cold.

"It's definitely been unseasonably cold here," Coughlin said. "They call it the Winternationals for a reason. Southern California typically doesn't dole out 30- and 40-degree temperatures like we've had each morning but it's also been beautiful blue skies to race under. Hopefully we can more of that tomorrow. They are calling for some rain, at least preliminarily, so we will wait and see."