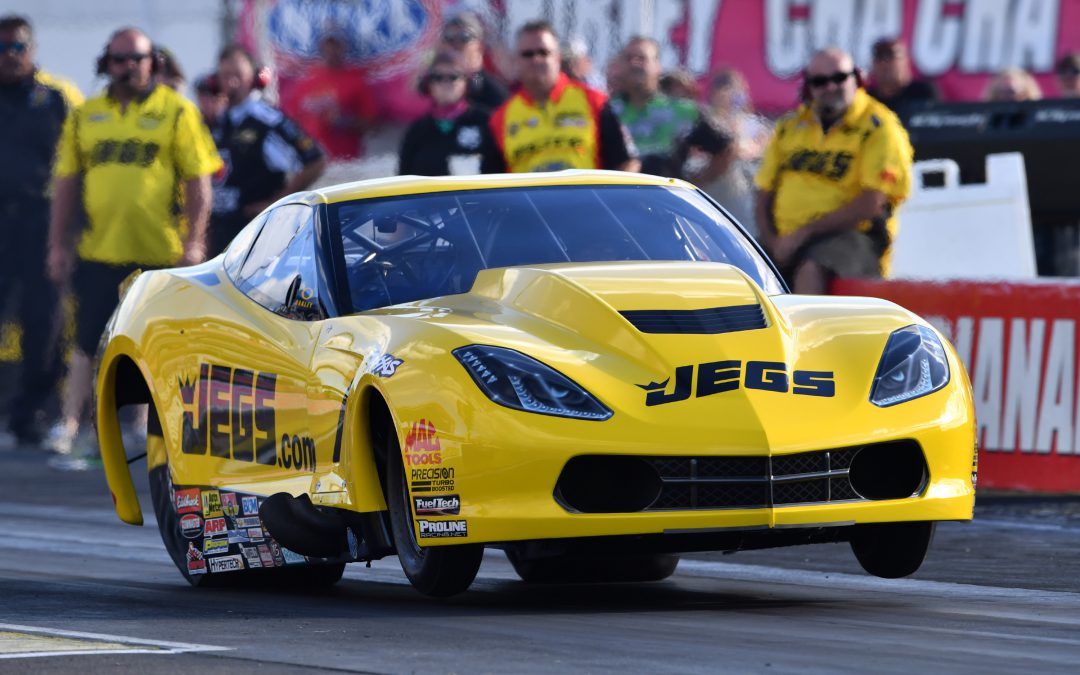 INDIANAPOLIS (Sept. 3) – JEGS.com driver Troy Coughlin Sr. is one round away from securing the No. 1 qualifying spot for the most prestigious race of the NHRA J&A Service Pro Mod Series.

Troy Sr. maintained the provisional No. 1 spot in qualifying for the JEGS.com Pro Mod portion of the Chevrolet Performance U.S. Nationals on Saturday at Lucas Oil Raceway.

Troy Sr., whose turbo Corvette was No. 1 after the first session on Friday, lowered his elapsed time in Saturday's Q3, making a track-record, elapsed-time run of 5.773 seconds at 254.76 mph

"We are racing at Indy," Troy Sr. said. "This is The Big Go. This is the biggest race of the year and it seems like a lot of the competitors are on pins and needles trying to get everything out of their car that they can and if we could be fortunate enough to leave here with the No. 1 qualifier here at Indy that would be pretty stout for sure."

Troy Sr. has one more session to maintain the No. 1 spot before eliminations begin Sunday.

"The second pass today was a little bit better than the first pass." Troy Sr. said. "The temperatures were a little better, the track was a little cooler. We had the car hopped up a little more to run pretty fast on the second pass so (crew chief) Steve (Petty), Mike (Rees) and Kyle (Pettis) have been working on this thing all day to get it to pick up.

"Track conditions on the second pass were a lot better than they were on the first pass, and we just tuned up the car like we did last night’s run in similar conditions. We know what to do in those conditions.

"But tomorrow night, first round of competition is a little sooner in the day so we are going to try to compare notes between this session and the first session today and try to put together a good package for that, probably for tomorrow’s last qualifier."

Troy Coughlin Jr. won in the third round of Super Gas when his opponent, Randy Shipp, broke out by .003 seconds. Troy Jr.'s JEGS.com roadster made a pass of 9.909-seconds at 163.83 mph on a 9.9-second dial-in to get the win. Troy Jr. runs round four on Sunday.

Troy Jr.'s uncle, Jeg Jr., is in the No. 13 spot after three Pro Stock qualifying sessions, with a best pass of 6.666 seconds at 206.76 mph. The five-time U.S. Nationals champion will have to make the field in the final two sessions Sunday with his Magneti Marelli offered by Mopar/JEGS.com Dodge Dart.

Jeg's wife Samantha lost in the third round of Super Comp when her JEGS.com dragster went red by .006 seconds, giving the win to Mike Robilotto.