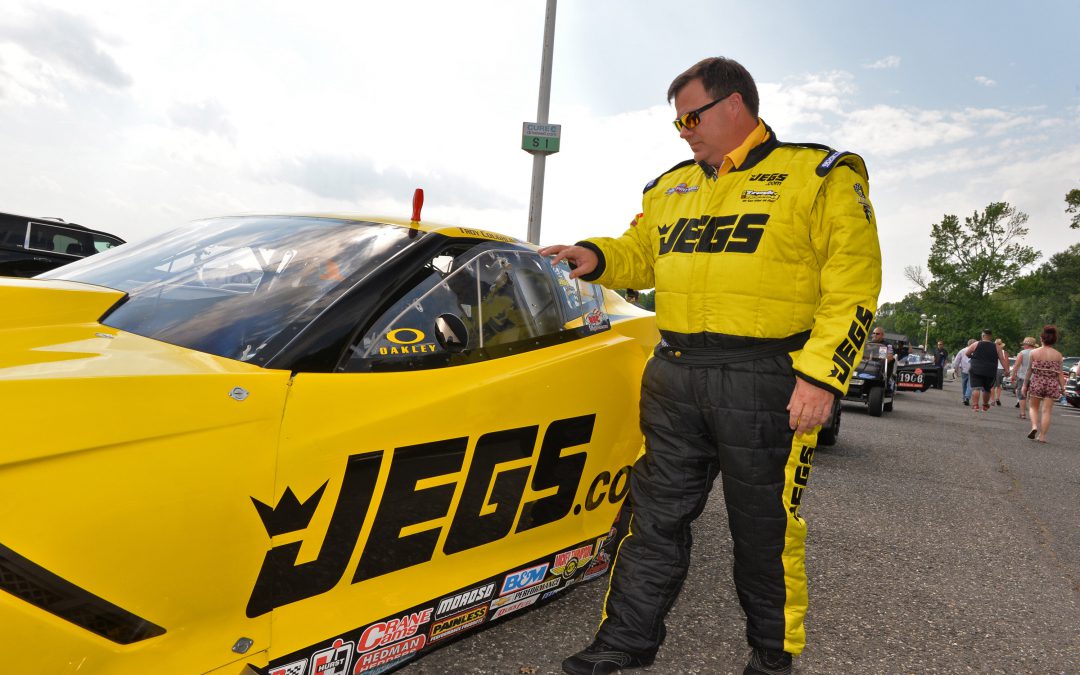 On Sunday, he hopes to bob and weave past three more.

The two-time Pro Mod champ slipped past first-round opponent Mike Janis when both cars didn't perform as well as anticipated. Coughlin's winning pass was 6.006 seconds at 232.67 mph, while Janis crossed the finish line in 6.012 seconds at 216.41 mph.

"We did dodge a little bullet there," Coughlin said. "I don't know if it went over a little bit of a bump or starting spinning the tires out there a little bit, but it didn't like it. We definitely dodged a bullet when he had issues on his car."

Coughlin, the No. 7 qualifier, got off the starting line first with a .037-second reaction time, but his JEGS.com Corvette started drifting left toward the wall.

"Our car was off on a good run," Coughlin said. "It was going to run fast, but then something happened. We'll have to go through and check out the car because something upset it out there. It moved over to the left a little bit, and once it gets out of the groove to the left, it's going to keep pulling you toward the wall because it's spinning that one tire harder than the other one."

Coughlin kept it off the wall and under control enough to get the win light and advance to the second round.

"We'll put the A-team on it and get (crew chief) Steve, Mike (Rees) and Kyle (Pettis) and those guys out there working on it," Coughlin said. "We've even got Big Chief under the race car, working on it. Maybe some of the Street Outlaws stuff will rub off on us, which would be pretty exciting to see."

Coughlin has been plenty fast this weekend despite an additional 50 pounds NHRA added to the turbocharged and nitrous Pro Mod cars for this race. His best pass of 5.908 seconds at 254.90 mph got him in the top half of the field, and that speed was second among the Pro Mod cars.

"It's been running good," Coughlin said. "Since they put the weight on us, it slowed us down a little bit. But it's coming around, and I think it's going to be pretty cool. Looking forward to tomorrow."

Coughlin well next square off against No. 2 qualifier Rickie Smith, who beat Gerry Capano in the first round. Smith, too, had issues, but the win light was already on in his lane.

"He'll be right there, there's no doubt," Coughlin said. "Something must've happened to him in the first round (because) we've got lane choice. He'll be tough."