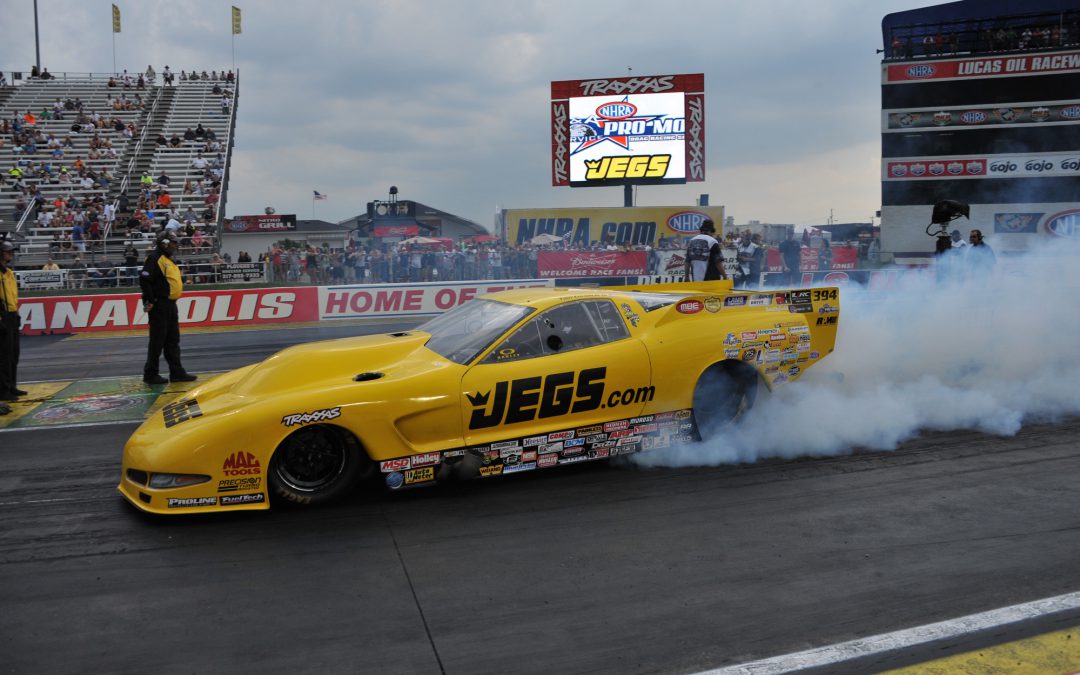 INDIANAPOLIS (Sept. 7) – Things were going well for JEGS.com driver Troy Coughlin Jr. at the Chevrolet Performance U.S. Nationals on Monday at Lucas Oil Raceway – until a couple hundred feet down the track in the J&A Service Pro Mod race.

First, Coughlin was able to enjoy professional driver introductions at the U.S. Nationals for the first time in his young career after winning in the first round of the JEGS.com event Sunday

Then, Coughlin got the jump on No. 1 qualifier Khalid alBalooshi in their second-round race, garnering more than five hundredths of a second on the starting line.

But not long after that, Coughlin had to pedal his JEGS.com Corvette when it got out of shape, and alBalooshi darted to the victory. Coughlin’s pass of 6.203 seconds at 247.66 mph wasn’t enough to hold off alBalooshi’s 5.914-second pass at 245.67 mph.

“Every order is the same tall order,” Coughlin said. “We just ran into a small issue with a hot track. We’re trying to figure out what the smoking gun is on the car and why it’s not responding to what we’re telling it to do.

“As a group, we’re going to put our heads together and collectively fix this thing. We’re going to keep going, just like everybody else. We just need to find something special. That’s what it takes to be a champion: that something special and not such mediocrity. It’s coming. Just have patience.”

Coughlin, a rookie in the Pro Mod series after a successful Sportsman career, is seventh in the Pro Mod points standings. And while he bowed out early in his first U.S. Nationals as a pro, he’ll carry the memories of the day with him for a long time. Participating in driver intros with his uncle, Jeg Coughlin Jr., was a special memory.

“It was really cool and pretty surreal,” Coughlin said. “It’s something I always watched as a kid, and I got to do it at Indy at the same time Uncle Jeg got to do it. It was pretty cool, a lot of fun, and I’ll never forget something like that. The only way it would’ve been better was to have dad up there, too.”

Troy Coughlin Sr. lost in the first round Sunday.