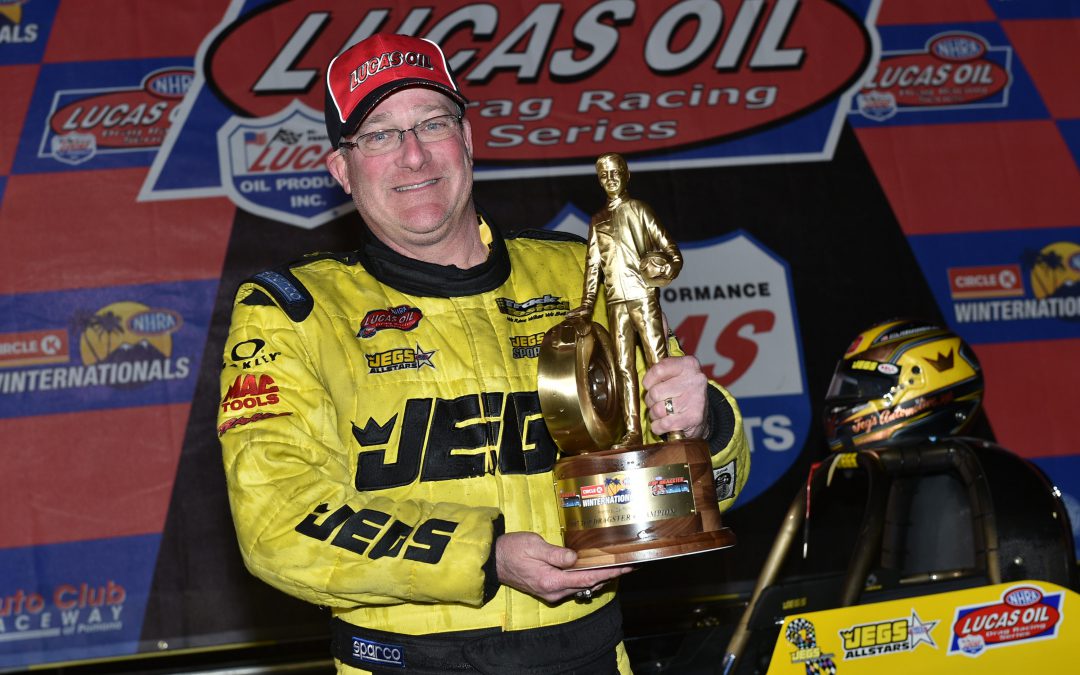 POMONA, Calif. (Feb. 12) — A native of Ohio who has raced Division 3 for most of his drag racing career, Mike Coughlin has never started a season as early as this year. But after winning the 57th annual Circle K NHRA Winternationals Sunday, things may just change a bit moving forward.

"What a way to start the year," an exuberant Coughlin said in the historic winner's circle of Auto Club Raceway in Pomona. "To think we were in testing less than a week ago with a broken motor and little hope we'd even be able to race this weekend, to end up here in the winner's circle is nothing short of remarkable.

"I don't usually start my racing until much later but with my brother Jeg (Coughlin) racing in Pro Stock and my nephew T.J. (Troy Coughlin Jr.) making his Top Fuel debut, I figured I'd come have some fun with them. Let me tell you, winning is fun."

Mike started Sunday with an easy victory over Steve Faller, who had to abort his Round 1 pass. He then got wins over Terry White, who went under his index, and Eddie Olpin Jr., who red-lighted.

Things tightened up in the semifinals where Mike used a .003-second reaction time advantage and a slightly better pass to eke out a .006-second victory over Jesse Adams. "I got away with one there," Mike admitted.

The two-time D3 Top Sportsman champion was quick to shrug off that close round win and used a great .011-second reaction time against final-round opponent Andy Spiegel's .033-second launch, to take a holeshot win at the top end.

"I don't see a lot of these West Coast racers so it was interesting to go up against them today," Mike said. "I feel very fortunate to come in here and take this win.

"The final was heart-stopping because as I staged the car I put the first bulb on and went to the brake and the car backed up out of the light. The auto-start was already initiated so I had to gather myself and get both bulbs on in a few seconds. Fortunately, I still had a great light and actually won the race on a holeshot."

Mike was cheered on all day by his son Clay, who was in attendance along with his family patriarch Jeg Coughlin Sr. He also had a huge contingent keeping up from home in Delaware, Ohio, on the internet.

"There are many people to thank but the guys at Proline Racing are at the top of the list," he said. "They got us a brand new motor overnight to Phoenix and we were able to put it in this JEGS.com dragster and make a few quick test passes before coming here and racing five rounds. This thing has been very fast and flawless right out of the crate.

"Ryan Mikie and the group at ComSync EFI are also a big part of this win. Their system is perfect for the way we run this car and it's so forgiving for what we do.

"My crew guys Tony Collier, David Raurk and Greg Cody have been awesome ever since we got to Phoenix to test. We'll stay out and race the Phoenix national event and then come back here for a divisional. We're planning on making the most of this trip."