JEGS.com’s Troy Coughlin Sr. hits one home run in Vegas, looks for another 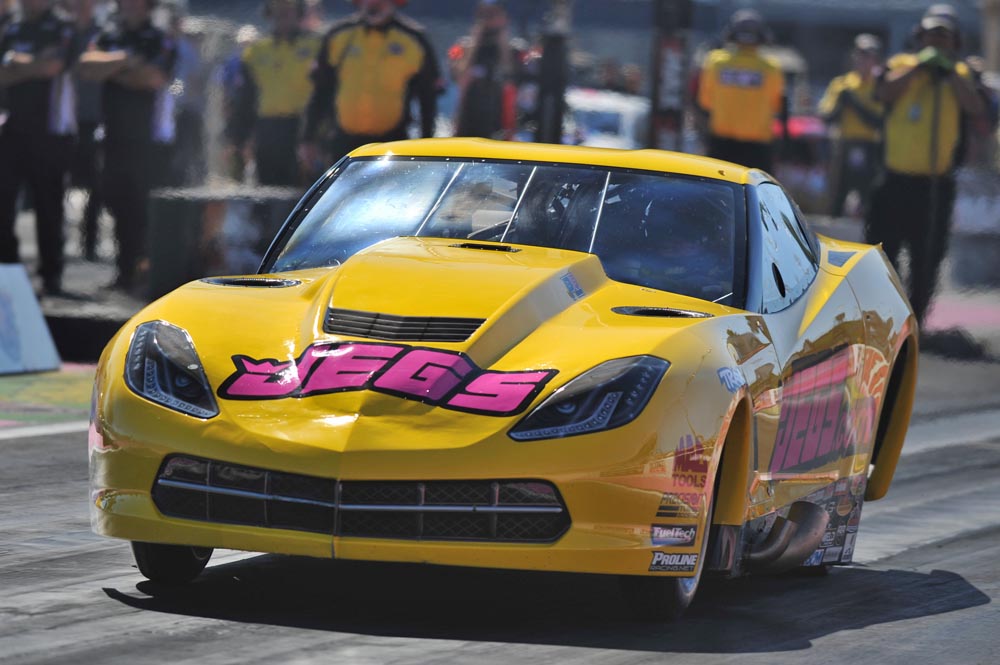 LAS VEGAS (Oct. 31) – JEGS.com Pro Mod driver Troy Coughlin Sr. came through in the clutch in the first round of the J&A Service Pro Mod Drag Racing Series event presented by Aeromotive Inc. on Saturday at The Strip at Las Vegas Motor Speedway.

Now, he needs to do it at least one more time.

The Pro Mod championship will be decided Sunday in the continuation of the NHRA Toyota Nationals, with Troy Sr. in the thick of the points race. He enters the day six points behind Mike Janis and 32 ahead of Bob Rahaim and a wild first round that saw Janis lose and Troy Sr. speed to victory.

"That was a big round, for sure," Troy Sr. said. "Any time you get a win, it's a big round. We had a tough competitor against Danny Rowe. We knew we had to dig deep, but the JEGS.com guys thrashing on this car this weekend, we pulled out a home run."

That victory came after Janis' car got loose in a losing run to Bob Rahaim. Janis had more than a tenth of a second lead at the Christmas Tree because Rahaim was late, but Janis' car slowed to a run of 6.860 seconds at 142.63 mph. Rahaim, third in the points, got the win with a 6.001-second pass at 217.91 mph.

"With Janis going out in the first round, it just gives us a little more opportunity to get the JEGS.com car a championship," Troy Sr. said.

Drivers earn 20 points with a round win, meaning if Troy Sr. wins in the second round against Sidnei Frigo, he'll take the points lead. But Rahaim is lurking, too.

"We'll treat it pretty much like any other raceday," Troy Sr. said. "I’m sure we'll have butterflies, nervousness and all that, but I know we'll have a fast car tomorrow. We've got a tough competitor tomorrow, too, so we're going to have to hit another home run."

Troy Sr. qualified No. 5 as crew chief Steve Petty and the JEGS.com team of Justin Beaver, Brandon Stroud, Kyle Pettis and Mike Rees have worked to get it better.

"The car has been about a seven-and-a-half player," Troy Sr. said. "Each round, we're getting a little bit better, a little bit better with everything. Hopefully, by tomorrow morning, we'll have it at 100 percent, and we'll get after it."