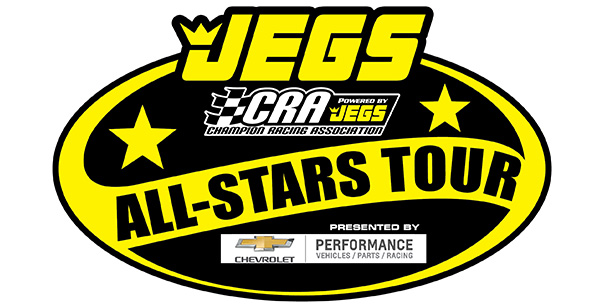 Salem, IN (September 2, 2020) – The JEGS/CRA All-Stars Tour Presented by Chevrolet Performance will head back to Lebanon I-44 Speedway in Lebanon, Missouri, this Labor Day Weekend for the first race in their 2020 Chase for the Championship. Normally the series would be at Winchester Speedway for the Labor Day Weekend World Stock Car Festival, but like most of the 2020 schedule, the COVID 19 Pandemic changed that up and the event was moved to Lebanon I-44 Speedway.

The JEGS/CRA All-Stars Tour kicked off their delayed 2020 season on May 30th at Lebanon I-44 Speedway, were Georgia superstar Bubba Pollard went to victory lane after a late race battle with former Lebanon I-44 Speedway Late Model Champion Cole Williams, in an event that was slowed by only one early caution.

The other drivers in the Chase and entered for Sunday’s event include last year’s series Championship runner-up Mandy Chick, who looks to be in position to claim her first series Championship at Winchester. Senneker Performance Rookie of the Year co-points leader Zachary Tinkle, the 2019 Vore’s Welding CRA Late Model Sportsman Champion, looks to make it two CRA Championships in a row in 2020. 2019 inaugural Victory Custom Trailers CRA Junior Late Model Champion Chase Burda, who also hopes to make it two CRA Championship in a row and claim the series Senneker Performance Rookie of the Year Award, which he is currently tied in points with Tinkle.

2018 ARCA/CRA Super Series Champion Josh Brock is also in the Chase with the JEGS/CRA All-Stars Tour for the first time, he got his first series victory at Anderson Speedway on June 13th. Two-time ARCA/CRA Super Series Champion Travis Braden is also in the JEGS/CRA All-Stars Tour Chase for the first time, he is tied for third in series all-time wins with seven, including last year’s season Championship event at Winchester. 2019 Victory Custom Trailers CRA Junior Late Model Championship runner-up Charlie Keeven looks to get a good start on his first Chase at the track closest to his home on Sunday. Trever McCoy is the eighth and final driver in the series Chase, he is the only other driver besides Chick who has competed in the series Chase in the past, he was fourth in the 2019 series Chase for the Championship final standings.

The series Chase for the Championship drivers will have plenty of competition on Sunday, including May 30th event runner up Cole Williams. Williams is a three-time series winner, claiming the Masters of the Pro’s event at Lebanon I-44 Speedway and the U.S. Short Track Nationals event at Bristol Motor Speedway in 2017 and won at Salem Speedway with the series in 2018.

Florida hot show Stephen Nasse is also entered. Nasse was the winner of the series SpeedFest 2020 event in January and got a series win at Winchester Speedway last year on Labor Day Weekend. Nasse finished third in the series event at Lebanon I-44 Speedway on May 30th.

The JEGS/CRA All-Stars Tour will have two 30 minute open practice sessions on Saturday, then will have the first ever CRA “King of the Hill” Bracket Challenge for the top eight in those practice sessions right before the ARCA/Menards Series will hit the track for their Zinsser SmartCoat 200 at 8pm.

Online sales began on Tuesday afternoon for 2-day discount grandstand tickets in addition to wildside tier parking and pit passes. Saturday only and Sunday only tickets, pit passes, and wildside parking options will also be available. For more detailed information and to order tickets, wildside parking, and pit passes, visit www.trackenterprises.com or contact the Track Enterprises office at 217-764-3200.

Fans unable to make the trip to Missouri for the big CRA Late Model doubleheader on Sunday, will be able to watch live on Speed51.TV, which debuted last weekend. Go to Speed51.com for details.

More information on the JEGS/CRA All-Stars Tour can be found at www.cra-racing.com.