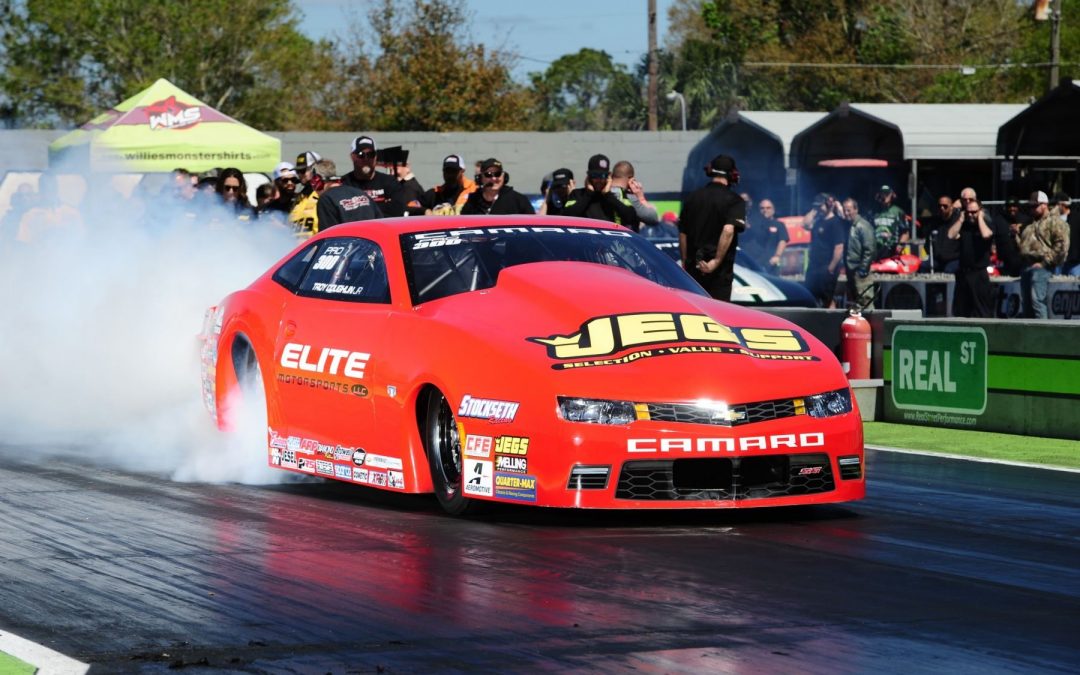 ORLANDO (Jan. 15, 2021) – An incredible inaugural event, coupled by a win for the ages in Pro Stock led to a memorable weekend for JEGS at the CTech World Doorslammer Nationals in Orlando, prompting the industry giant to return as a race sponsor for the 2021 event.

The worldwide high-performance parts powerhouse has been named the presenting sponsor for the second annual event, which takes place March 5-7 at Orlando Speed World Dragway.

Pro Stock and Pro Mod will again headline the event, which promises huge payouts, including $75,000 for the winner in Pro Stock. Team JEGS star Jeg Coughlin Jr., who has five Pro Stock world titles to his credit, won the inaugural event a year ago, just one of many special memories the company took from the race.

“Being part of this event last year was really special,” said Scott Woodruff, Director of Media and Motorsports at JEGS. “It was a race created for people who have a passion for racing, and there was just a special feeling before and during the event. We’re excited to show our support for this event and see it grow even more. Everyone involved has done a great job, it was a great success last year and with more time to plan, we’re looking forward to seeing it grow even more.”

JEGS celebrated its 60th year of business last year and continues to enjoy immense success as a worldwide e-commerce leader in the mail-order, high-performance auto parts business. It offers more than one million items for purchase at its massive, state-of-the-art corporate headquarters, warehouse and distribution center, putting JEGS at the forefront of the auto parts business.

JEGS is also a company embedded in the sport of drag racing, offering support on a number of levels. One of those areas is in the sportsman classes, which will have a strong presence at this year’s CTech World Doorslammer Nationals presented by JEGS.

Top Sportsman, Factory Stock Showdown, Super Stock, Stock and Competition Eliminator will each be racing for $10,000 in Orlando, giving sportsman competitors the chance to race on a big stage for big money. It will also put even more racers and eyeballs on Orlando in March, and Woodruff is confident it will be one of the biggest races of the year.

“We see 30 events or so a year, so for this one to stand out says something,” Woodruff said. “It’s definitely a must-attend and a must-watch race. With all the sportsman classes there, it’s going to be a huge deal. Those are great classes near and dear to the heart of JEGS. There’s just a lot of excitement for this race and we’re definitely looking forward to it.”

Woodruff loved the camaraderie and family feel at the inaugural race, but also noted the high level of competition with all the top names racing for the chance at the biggest single-race purse in Pro Stock history.

Troy Coughlin Jr. made his Pro Stock debut at the race a year ago and will be back to compete in 2021 against what will be a full slate of top-tier talent. While the racing was intense in 2020, the first-class treatment of the race teams also had a profound effect, something JEGS was glad to be part of a year ago.

“It was definitely one of the highlights of the year, on and off the track,” Woodruff said. “To see the racers be rewarded with a big-money race at a great family friendly facility and to have the racers come first, that was really exciting for JEGS to be a part of.

“We’re looking for even bigger and better things this year, and I think there’s going to be a lot of eyeballs on this race thanks to the success last year and the group working together on the event. Word of mouth is pretty powerful and everyone came away saying how great this race was. That’s the type of event you want to be involved with if you’re a sponsor, a racer or a fan. That’s a win-win-win.”