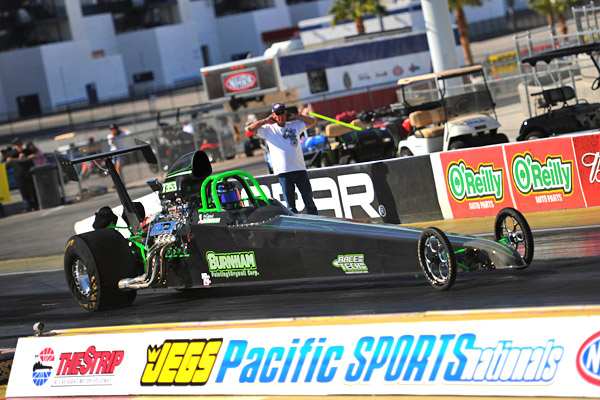 Tony Tetone claimed the Super Comp victory over Andrew Madrid by running right on the 9.05 altitude adjusted index in the final round. It was a similar story in the Super Gas final as Rick Cates matched the 10.05 index for the win over Roger Kato, who broke out with a 10.04. In Super Street, Scott Evans claimed the victory after a red-light start by Jed Dahar.

In the Top Sportsman final, Tom Schmidt claimed the victory by beating Rod Hymas in the final round. The Top Dragster final round was set to feature Geneva Nash and George Prather, but it was not contested due to time constraints and both drivers were declared co-champions. In the final round of the Sportsman Motorcycle presented by Harley-Davidson, Leo Shaver won after a foul start by Gaige Herrera.

Saturday’s runs also set the fields for Sunday’s eliminations and all of Friday’s top qualifiers managed to maintain their place in the standings.

JEGS Allstars champion Mike DePalma held on to the lead in Comp as no one was able to better his 9.003-seconds (-.667 under the index) run from his ’90 Trans Am. Clint Sallee and Tom Mettler are also solidly in the mix with runs that are more than six-tenths of a second under their respective indexes.

Bo Butner held on to the top spot in Super Stock behind the wheel of his Cobra Jet Mustang despite a challenge from Frank Grossi and Keith Lynch. In Stock, Stephen Hagberg finished as the qualifying leader following his 10.133-second run in his Hemi-powered ’64 Plymouth. Super Stock and Stock drivers were plenty busy on Saturday as they completed the class eliminations portion of the program.

The Top Dragster pole went to Jesse Adams following his 6.12-second run on Friday. Adams was able to stay ahead of Lyle Burnham and Stephanie Crifasi, who are second and third, respectively. Past JEGS SPORTSnationals winner Joe Roubicek is the qualifying leader in Top Sportsman with a 6.65-second run in his ’68 Camaro. Tommy Turner and Gary Ross are ranked second and third.

The JEGS Pacific SPORTSnationals will race to a conclusion on Sunday with final eliminations scheduled to begin at 8:30 a.m.