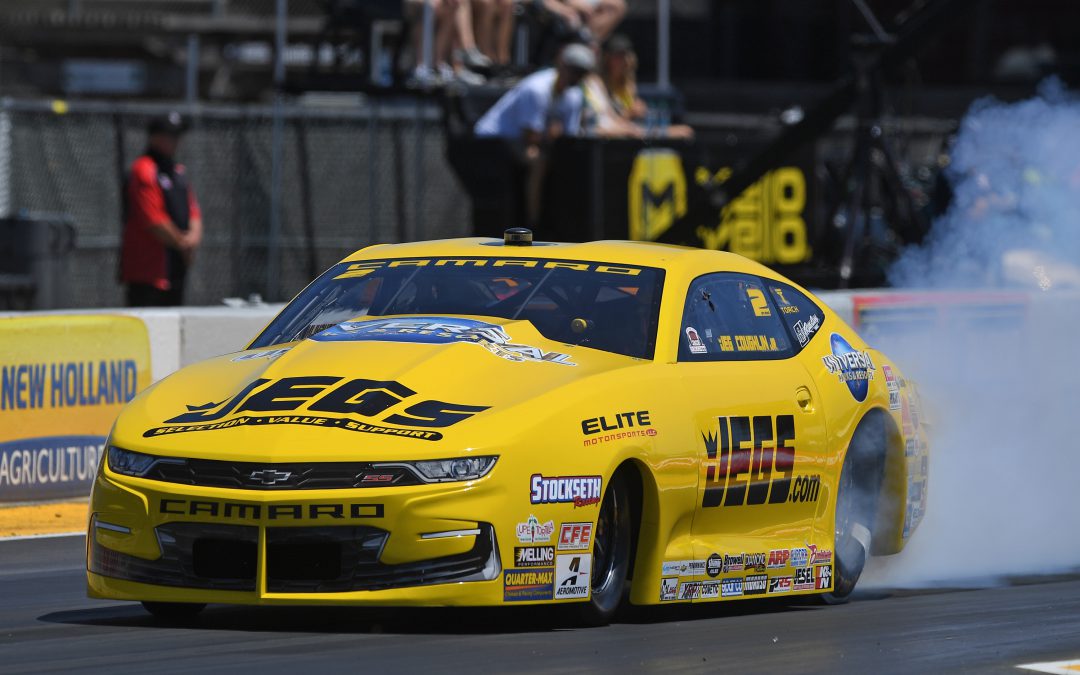 SONOMA, Calif. (July 27) — Six-time world champion drag racer Jeg Coughlin Jr. will begin the defense of his NHRA Sonoma Nationals title from the third position on the elimination grid after an impressive four rounds of qualifying, highlighted by a Friday evening pass of 6.533 seconds at 210.41 mph.

Three of Coughlin's four qualifying passes in his JEGS.com Elite Motorsports Chevrolet Camaro earned him bonus points as they were ranked among the top three of the session. That sort of consistency, when coupled with Coughlin's reliable driving skills, is what helps win races.

"We definitely made four good, quality runs in qualifying here and we're excited about race day," Coughlin said. "In Q4 we ended up being off by just a tick, but it's nothing to be concerned about as Rickie (Jones, crew chief) and the guys were just trying some things in the heat.

"We'll go over everything with a fine-tooth comb and get set for another hot day tomorrow. I believe we got a really good taste of the conditions we'll face on race day with the intense sun and hot track temps we experienced today. We'll tune off the pass we made this afternoon in Q3 and work from there."

Aside from last year's victory here, Coughlin was also the Sonoma champ in 2003 and 2010.

For the second consecutive Sunday, Coughlin will open elimination action opposite Fernando Cuadra Jr., who qualified 14th overall with a 6.583 at 209.26 mph. In two meetings this year, Coughlin has mastered the rookie on both occasions.

"There are certainly no gimmes in Pro Stock so we'll need to be up and ready for Round 1," Coughlin said. "Our confidence level is good. We're very happy with the tuning package and I was pleased with my driving in qualifying. It's time to get aggressive because we're moving to race day. I want to get up on the wheel, give good feedback to my guys, and see if we can't earn some more win lights.

"If you look at the schedule, we only have a few races left before we reset for the Countdown to the Championship playoffs so we've talked about erring on the aggressive side with all the elements of having the car prepared. It's 'go time' from here on in. It feels just like the big-dog bracket races we've been attending where you need to be near-perfect every time up there to be successful."

Coughlin's brother Mike Coughlin, who currently leads the Division 3 championship chase in Top Dragster, lost a close second-round match-up earlier Saturday evening. The defeat at the hands of James Warden hardly dampens the run Mike and his crew have enjoyed this past month, which included back-to-back wins in Indy and Chicago and a semifinal finish one week ago at a divisional race here in Sonoma.