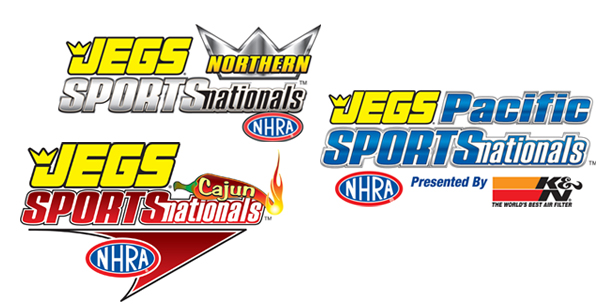 GLENDORA, Calif. (Oct. 31, 2013) – JEGS Mail Order, a nationwide leader in the sales and distribution of parts and supplies for the aftermarket performance industry, has signed an agreement with NHRA to continue as the title sponsor for all three NHRA SPORTSnationals events through 2016.  The end of this latest renewal will represent 12 consecutive years that JEGS Mail Order has sponsored NHRA Sportsman racing’s own “triple crown.” JEGS Mail Order came on board in 2005, one year after NHRA reinstituted the event.

Earlier this year, JEGS announced that it extended its sponsorship of the JEGS Allstars event, a race-within-a-race bonus program for the best of the best NHRA Lucas Oil Drag Racing Series competitors through 2016.

The JEGS NHRA SPORTSnationals are events on an impressive scale, made exceptionally meaningful by the camaraderie evident throughout the ranks of sportsman racers, but the intense competition, and by the understandable overall NHRA Drag Racing fun inspired by the events.