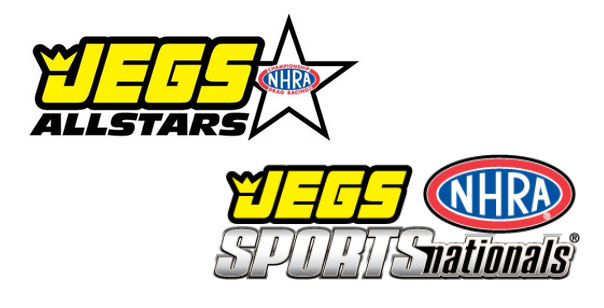 GLENDORA, Calif – JEGS, one of the largest high-performance automotive equipment retailers in the United States, has extended its NHRA sponsorships of the JEGS Allstars program and the JEGS NHRA SPORTSnationals event. The multi-year extensions will keep the JEGS name on these tradition-rich programs tailored for sportsman drag racers. JEGS has been the title sponsor of the Allstars competition since 2002 and came on as the title sponsor of the SPORTSnationals in 2005.

“JEGS and the Coughlin family is excited to extend our partnership with the NHRA for both of these prestigious events for competitors in the NHRA Lucas Oil Drag Racing Series,” Scott “Woody” Woodruff, JEGS director of media & motorsports. “We take great pride in making these events better-and-better each year with the support and dedication of the racers and the NHRA. JEGS will be celebrating our 60th anniversary next year and the racing community has been with us every step of the way for all 60-years. This is another way to say thank you and show people the JEGS way.”

The JEGS Allstars event is a race-within-a-race bonus program for the very best in the NHRA Lucas Oil Drag Racing Series which takes place annually at the Route 66 NHRA Nationals in Chicago. It’s one of the most anticipated events of the season when these high-performing sportsman racers hit the track to face off in a battle for individual and team honors. It pits the top points earners from NHRA’s seven geographic divisions and four Top Alcohol regions against each other in the culmination of a yearlong points battle

The JEGS NHRA SPORTSnationals is a premier standalone event for competitors in the NHRA Lucas Oil Drag Racing Series. This event awards national points to competitors and features three days of intense racing action from the top sportsman racers in the country. Widely regarded as one of the biggest and most prestigious weekends in sportsman racing, the 2019 event will take place at National Trail Raceway in Hebron, Ohio, September 20-22.

“We appreciate our strong relationship with JEGS and are thrilled to see the continued support of sportsman racing through these two significant events,” said Brad Gerber, NHRA vice president and chief development officer. “We look forward to the coming years and more exciting racing action thanks to JEGS.”