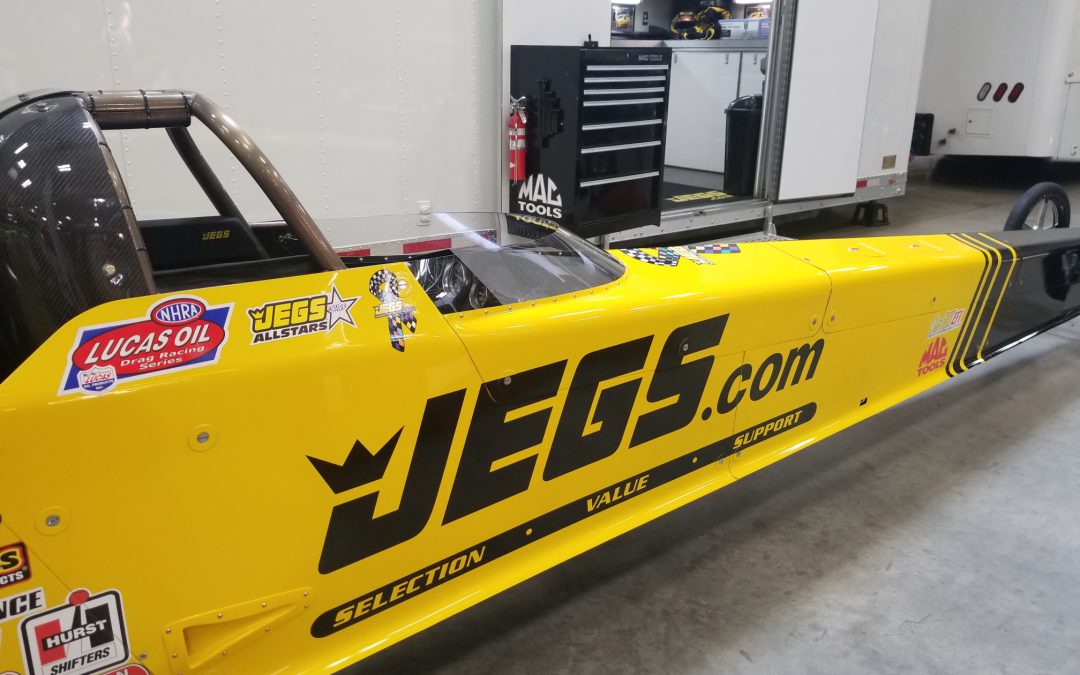 INDIANAPOLIS (July 3) — Two-time Division 3 champion Mike Coughlin leads a trio of JEGS.com sportsman racers into this weekend's Summer Spectacle Drag Race in Brownsburg, Ind. Mike and his niece Paige Coughlin are sporting a brand-new look on their dragster that are sure to turn some heads, while nephew Troy Coughlin Jr. is contesting the event in his Uncle Jeg Coughlin Jr.'s reliable Corvette Roadster.

"We have a new look and a new attitude," said Mike, the D3 Top Sportsman champ in 2007 and 2009 who now races in Top Dragster. "My dad (JEGS founder Jeg Coughlin Sr.) actually came up with the idea to make the front of our dragsters black and I think it gives us a bit of a sinister look. Now we all need to go out there and prove we mean business on the racetrack."

Mike and crew spent last weekend at National Trail Raceway preparing for a busy stretch of five races in the next four weekends, including divisional events in Indianapolis, Chicago and a double-header in Sonoma, Calif., as well as the NHRA national event in Sonoma.

"There's a feeling on the team that we finally have a racecar we can rely on and race with, which has really raised the excitement level around here, and that includes my dad, who has been here helping us," Mike said. "We put a new supercharger on the dragster that has been operating perfectly. It's a Fowler F12 roots-style blower made by a gentleman right here in Columbus (Ohio).

"The screw (blower) we've been using showed so much promise at times but it was very hard to work with. It just seemed like we were fighting it every race. Now we have a combination we don't need to worry about. I think we're all very anxious to start racing."

Aside from his nephew and niece, Mike will have son Clay with him at all of the races for the next four weekends and his other son Jack plans to join the crew in Sonoma. Wife Kriss will be holding things down at home and keeping up with the action online.

Reveling in her summer break from Miami University of Ohio, 19-year-old Paige is hoping to create some excitement in her black-nosed Super Comp dragster. Working with crew chief Justin Beaver, this event is the third of the year for the college coed. She had a great showing last weekend at her first high-dollar bracket race in Martin, Mich.

"I've never been to a race as big as the one in Martin and I sure learned a lot racing with my Uncle Jeg and Aunt Samantha," Paige said. "There were 700 cars there and most of the racers were super experienced so it was very cool to be a part of it all. Plus, we went rounds in every race and even got down to the final five cars in the lady's race so it was a good showing for us.

"The JEGS.com Super Comp dragster has been super consistent and if it stays like it was in Martin then we have a great chance to turn on some more win lights in Indy. It's a great track and I'm excited to be racing and to be spending July 4th weekend with my family."

Riding high after a big Top Alcohol Dragster win at the NHRA national event in Norwalk, Ohio, Troy Coughlin Jr. heads to Indy with two things on his mind — helping his sister Paige dial-in her Super Comp dragster and driving Uncle Jeg's Corvette Roadster to a victory in Super Gas.

"I already had plans to go to Indy and help Paige out," said Troy Jr., the reigning North Central region TAD champion. "I love racing with my sister and I am always intrigued and challenged by the arithmetic involved in throttle-stop racing. The way she has been driving, I know if we give her a reliable car, she can win races because she's clubbing the Tree this year.

"I thought since I was already going to be in Indy, why not ask Uncle Jeg if I could race his roadster. He told me the keys were on the dashboard and to go and have fun, so I'll be racing as well. I'm ready to enjoy myself, spend some quality time with my family, and maybe see if one or more of us can gather some more little gold men (trophies)."