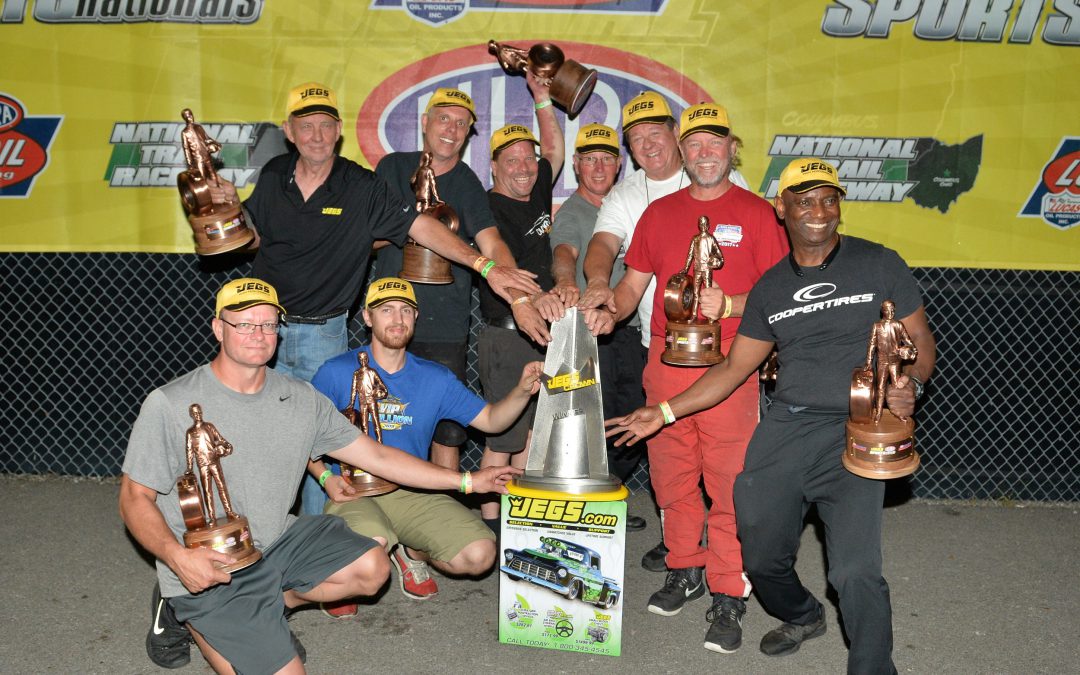 (HEBRON, Ohio Sept. 22) – Terry Smith, Dan Steed, and Jeff Taylor were among the nine champions crowned today at the JEGS SPORTSnationals held at National Trail Raceway. Smith earned the title in Comp Eliminator while Steed picked up his first NHRA national event title in Super Stock, and Taylor won for the 46th time when he earned the Stock title.

Steed, of Radnor, Ohio, earned his first national event win by stopping Matt Morris in the final round. Steed drove his ’66 Chevy Nova to a perfect 10.52 elapsed time on his 10.52 dial-in for the victory while Morris broke out with a 9.89 on his 9.92 prediction.

Taylor, Sellersburg, Ind., is a four-time world champion and now 46-time national event champion after winning the Stock title. In the final round, Taylor drove his ’15 COPO Camaro to a 9.70 on his 9.64 dial to defeat Bill Sempsrott in his ’66 Nova. Taylor now has six wins at National Trail Raceway including JEGS SPORTSnationals titles in 2005, 2008, and now 2019.

Jirousek, of Elyria, Ohio, was a runner-up in Saturday’s K&N Shootout race and used the momentum to capture the victory in Super Comp when he defeated past Rick Pistole in the final round. Jirousek ran a perfect 8.90 on the 8.90 index for the win while Pistole ran too-quickly with an 8.89-second breakout.

The Super Gas title went to Deffenbaugh, Lebanon, Ind., after he drove his ’66 Nova to a 9.91 to defeat past NHRA world champion Jacob Elrod, who broke out with an 8.89 in his Corvette roadster.

A perfect 10.90 run in the Super Street final helped Unum, Anna, Ohio, earn his first NHRA title in his ’69 Firebird. Unum also won via a breakout after his opponent, Gary Horstmann ran too quick with a 10.89. Horstmann was the winner of the 2017 JEGS SPORTSnationals in Bowling Green, Ky.

Wasko, of Columbia Station, Ohio, left with the trophy in Top Sportsman presented by Racing RVs.com when he drove his Pontiac GXP past the ’69 Camaro of reigning Division 2 Top Sportsman champ Sandy Wilkins in the final round. Wasko finished the job with a 6.63 on his 6.60 dial-in while Wilkins lost despite a 6.66 on his 6.66 dial.

Nelson, Batesville, Ark., took over the lead in the championship standings in Top Dragster preseted by Racing RVs.com when he stopped David Maggard in the final. Nelson, who has now won three races this season, had a nearly perfect .001 reaction time and sealed the win with a 6.13 on his 6.10 dial-in. Maggard was close behind with a 6.71 on his 6.70 dial.

Nash made the long trip from Texarkana, Texas pay off when he rode his Suzuki to the title in the Sportsman Motorcycle class. Nash won the final with an 8.07 on his 8.03 dial-in against Dave Gautreaux, who missed his 9.00 prediction with a 9.09.