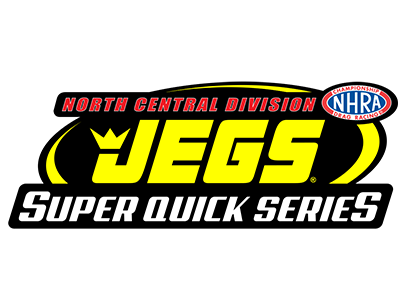 The NHRA JEGS Super Quick Series will make a return to Gateway Motorsports Park, April 11-12 as it launches into its 27th season in the North Central Division.  The eight-race 2015 season includes a new stop at Muncie Dragway (Ind.) and will close out at Lucas Oil Raceway at Indianapolis, Oct. 10-11.

The 2015 series will feature three events with 64-car fields including the season opener at Gateway, a return to a spring event at Lucas Oil Raceway at Indianapolis, April 25-26 and the season finale at Lucas Oil Raceway.  Each of the three will be two-day events while all other series events will be traditional 32-car fields and a single day format.

The series will once again be part of the annual NHRA SportsNATIONAL OPEN at Beech Bend Raceway Park in Bowling Green, Ky.  Qualifying and eliminations will be on Saturday of the event and Sunday we will take care of some unfinished business from 2014 with the Quick Fuel Technology Super Quick Shootout.  The Shootout was rained out last fall in Indy and has been rescheduled for Bowling Green home for Quick Fuel Technology the premier maker of modular carburetors for racing, marine, and street performance markets.

Tony Pranger became the series’ 21st different champion leading last year’s point battle from end to end and watching as Al Peavler came within .007 seconds of a final round victory that left him one point short of the title.  Pranger will be looking to defend his title and he’ll once again have plenty of competition as top ten finishers Peavler, Mike King, Mike Bagley, Tony Virgilio, Mitchell Carter, Logan Cron, Ken Storey, Jeremiah Hall, Jeremy Busenbark and a host of others will be challenging.

A racer’s five best point finishes will be counted in the eight-race 2015 series.

The Division champion will be honored at the annual North Central Division “Land of the Winners” Awards Banquet in Indianapolis, December 12.

JEGS Automotive Inc. with world headquarters in Delaware, Ohio, is a leading supplier of automotive and auto racing parts and equipment.  www.jegs.com