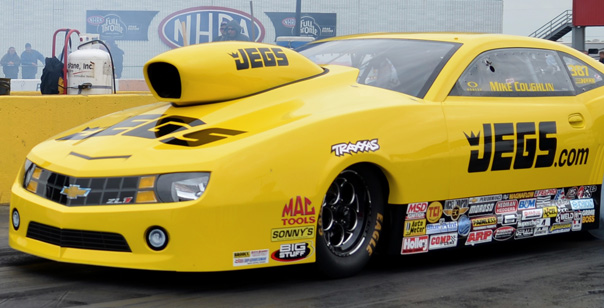 JOLIET, Ill. (June 7) – The NHRA North Central Division Lucas Oil Drag Racing Series will make its third stop of the 2013 season this weekend at Route 66 Raceway in Joliet, Ill., and the event will provide plenty of opportunities for JEGS Mail Order teammates Mike and Troy Coughlin Jr. to shine.

Mike will be racing his new Chevy Camaro in the Top Sportsman class, which also includes the completion of the rain-delayed season opener from Lucas Oil Raceway in Indianapolis, while third-generation racer Troy Jr. will pull double duty in Super Comp and Super Gas.

A two-time North Central Division Top Sportsman champion, Mike is still getting comfortable behind the wheel of his 210-mph JEGS.com Camaro, but he believes that it's already one of the best race cars he has ever driven.

"We last ran the car in Norwalk a couple of weeks ago and even though we didn't win any rounds it was not the car's fault," Mike said. "I've probably made 10 or 11 runs and I can already tell this is a better car than my old Cobalt. The technology in these cars has come so far that they are faster and more consistent than ever before."

Mike also is excited about completing two events on the same weekend, which will give him more seat time in the new car.

"We're going to finish the Indy race on Friday and then run the Joliet event on Saturday and Sunday, which means that if someone gets on a roll they could make 12 or 13 runs," Mike said. "I'd like to be that guy. It's no different than some of the big bracket races we've competed at. When you have a chance to make more runs in a weekend it helps make everyone more competitive. I'd much prefer a busy schedule than having a lot of downtime."

With one national event win and one divisional victory to his credit, Troy Jr. is off to one of the best seasons of his career. The 22-year-old will enter the Joliet event ranked third in the Super Gas class and a respectable 37th in Super Comp. His confidence is soaring following a victory at the most recent North Central Division event in Norwalk, Ohio.

"So far, so good," Troy Jr. said. "Things are going pretty well in both classes but we need to keep looking forward. There is still a lot of racing left this season before anyone can start thinking about championships. I enjoy racing both cars, but I'm really looking forward to getting back behind the wheel of our Super Gas Corvette. That car has been awesome this season.

"There is a lot going on this weekend. My sister Meghan, my cousin Clay, and my crew chief Jay Schroeder will be with us, and they provide us with a lot of support. We've got some momentum, so now we just need to keep it going."