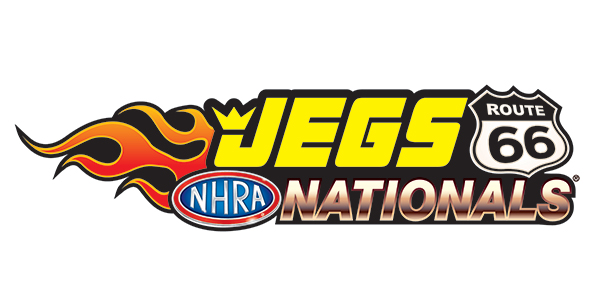 GLENDORA, Calif. (May 2, 2018) – JEGS, one of the largest high performance automotive equipment retailers in the United States, has reached an agreement with NHRA as the title-rights sponsor for the NHRA Mello Yello Drag Racing Series event taking place at Route 66 Raceway outside of Chicago. The JEGS Route 66 NHRA Nationals will take place on May 31-June 3 and will feature competition in all four professional categories.

The entitlement builds upon the involvement by the organization as the JEGS Allstars specialty race will take place on Saturday, June 2. This race-within-a-race will pit the top points earners from NHRA’s seven geographic divisions of the NHRA Lucas Oil Drag Racing Series and four Top Alcohol regions against each other in the culmination of a yearlong points battle. Competitors in Top Alcohol Dragster, Top Alcohol Funny Car, Comp Eliminator, Top Sportsman, Top Dragster, Stock Eliminator, Super Comp, Super Gas, Super Stock, and Super Street will compete for team and individual honors as well as a share of the $124,000 purse.

"JEGS has been involved with the sport of NHRA drag racing for decades and we are excited to have them on board as this iconic event celebrates its 20th year,” said Brad Gerber, NHRA vice president and chief development officer. “JEGS supports NHRA in a number of ways including the long-standing sponsorship of several drivers in both professional and sportsman categories.”

“At JEGS, our history and tradition in motorsports, especially with the NHRA, goes back to our founding over 50 years ago,” said chief executive officer of JEGS Automotive, Inc., Jeffrey R. Hennion. “We are excited to announce this broader partnership with the NHRA both at the JEGS Rt. 66 NHRA Nationals and with a broader, enhanced media relationship supporting NHRA national events throughout the year. We look forward to helping to make the JEGS Route 66 NHRA Nationals a memorable experience for all race fans, including all those competing in the JEGS All-Stars.”

The JEGS Route 66 NHRA Nationals is the ninth of 24 events on the NHRA Mello Yello Drag Racing Series. It will be televised on FS1 and is the first of four consecutive events, which could prove critical for NHRA teams chasing title aspirations. Route 66 Raceway features the first true stadium of drag racing and has witnessed impressive performances by the top racers in the sport.

JEGS Automotive, Inc. (JEGS) is one of the largest e-commerce and mail order high-performance auto parts retailers worldwide. Founded in 1960 by racing legend Jeg Coughlin Sr., JEGS remains family-owned to this day and offers more than 1 million SKUs available for purchase. The JEGS corporate headquarters is located in Delaware, Ohio, and is home to a 225,000-square-foot warehouse and distribution center, two state-of-the-art call centers, the Coughlin Family classic car and truck collection, the Team JEGS racing research and development facility and The JEGS Foundation. For more information, call (800) 345-4545 or visit us at www.JEGS.com.