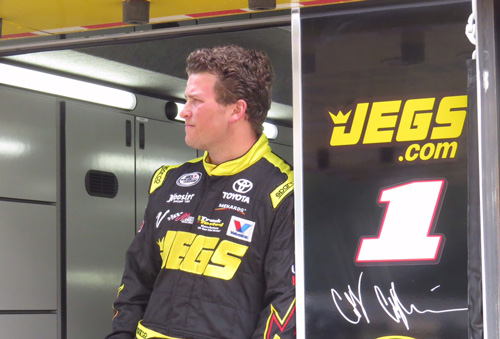 If you were not at Berlin Raceway in Marne, Michigan on Saturday night, you missed an impressive performance.  Track announcers hailed the run of 19 year-old Cody Coughlin as he marched from a 23rd starting spot and into contention for victory at the closing stages of the Berlin 125 for the ARCA / CRA Super Series.

The Joe Gibbs Development driver proved that you can overcome adversity throughout the day.  Berlin had been a sore-spot to Coughlin in the few times he has raced their in his young career.  After qualifying it did not get any better for Team JEGS.  Coughlin timed in eighth quick, but crew chief Nick Easton pulled the car out of the impounded area to help improve the car for the main event.  By doing so, Coughlin was relegated to start at the rear of the field.

Methodically Coughlin picked his way through the field and under the direction of spotter Scott Wimmer, Coughlin moved his way into the top 15 by lap 21, then top 10 on lap 33 and eventually the top five.  Coughlin did not settle; he was pushing for third when another driver snuck by him in the battle and the Delaware, Ohio native wound up fifth as the checkered flag fell.

“I will tell you, I haven’t been this happy about a fifth place finish in a long time,” exclaimed Coughlin after the race.  “We really have struggled here at Berlin over the past few years and didn’t finish in the top 20.  We didn’t qualify well and pulled it out of the impound area to work on it and got it better.  I am very pleased with our run.”

Along with the crew, Cody celebrated his strong run with his parents, John & Di, and his sister Kennedi.

“It was great to have them there tonight and I know they were happy with how we came through the field,” Coughlin said.  “It was also awesome to have other drivers, crew members and fans come up and congratulate us afterwards on our strong run.  That really capped off our fun night.”

Coughlin will now head to New Jersey Motorsports Park in Millville, New Jersey this weekend for his first attempt at road course racing with the ARCA Racing Series on Sunday, May 24th at 1:30pm ET.