JGR Development Driver Impresses All in First Trip to Daytona 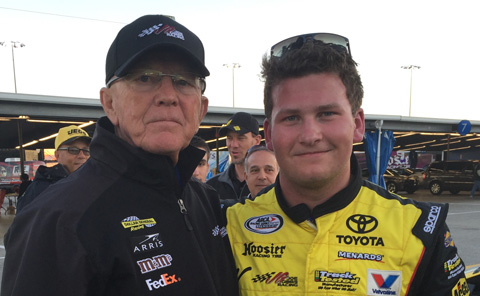 To start on the front row, lead laps, have a shot to win in the waning moments and finish in the top-five is a good day for any driver at Daytona Int’l Raceway.  Do that as a rookie though and it’s downright impressive.  That is the story for Joe Gibbs Racing Development driver Cody Coughlin, who scored a fourth place finish Saturday in the Lucas Oil 200 for the ARCA Racing Series at the “World Center of Racing.”

The 19 year-old proved his talent behind the wheel of the number-55 JEGS/Sport Clips Toyota Camry with family and friends, including three-time Super Bowl Champion Coach Joe Gibbs and JD Gibbs, President of Joe Gibbs Racing, in attendance to support him.

“It’s a great day.  It was really cool to finish in the top-five and get all of that experience,” Coughlin said after the race.  “When you go to the racetrack, all you can ask for is to be competitive and have a shot there at the end of the race, and that is what we did.”

Coughlin followed the 10-time ARCA Racing Series champion around the 2.5-mile oval and gained valuable experience doing so.  After a pitstop for fuel on lap 37, Coughlin restarted sixth.  It would only take three laps for the savvy youngster to weave his way back to the second spot.

In a battle for the ages in the closing laps, Coughlin made his move to take the lead, but did not have the supporting cast in terms of a drafting partner to make the move stick.  On the final lap, he had an intense war with Brett Hudson all the way to the checkered flag.  Coughlin was edged out for the final podium spot by a mere bumper at the line.

“We made a move early and thought we had it; it just didn’t turn up,” Coughlin said.  “We were close and I am happy that we had that chance to do it.  I learned so much and wish I could start another race right now with all that knowledge I gained.  This is something I won’t forget and I can’t wait to get back here and get into victory lane.”

Coughlin impressed many who watched the race in person and live on FOX Sports 1, including Joe Gibbs himself.

“To finish fourth in his first restrictor plate race, I think that is special.  He did a great job and he handled everything real well,” Gibbs said.  “He said he learned a lot and I felt like he had a chance there at the end. I think he has a bright future ahead of him.”

It was Coughlin’s third consecutive fourth-place finish in the ARCA Racing Series.

“I would like to thank JEGS and Sport Clips for their support this weekend.  I am also very grateful for Joe Gibbs Racing and Venturini Motorsports for their hard work to get us here today.”

After the race, Coughlin received many hugs and congratulations from his fellow competitors, teams, friends and most of all his family.

His parents, John & Di and his sister Kennedi celebrated with their driver on his accomplishment.

“My family has been my biggest supporter and I am elated they were here to share this experience with me.

“I also have to have thank God for a safe race out there today.   At the high speeds we were going with the tight racing all day long, I am thankful that he watched over all of us as He always does.”

Coughlin will now get ready for his Super Late Model event on Sunday, March 15th as he will compete in the Southern Super Series Rattler 250 at South Alabama Speedway in Opp, Alabama.