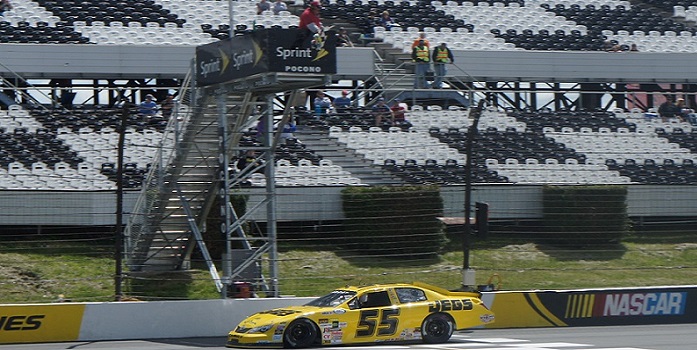 Friday afternoon, Coughlin used a fast lap of 54.622 seconds around the 2.5-mile “Tricky Triangle” in his No. 55 JEGS.com Toyota to claim his third top-10 qualifying run in four career ARCA Racing Series starts.

Coughlin’s solid qualifying run came after his team was forced to go to a backup car as a result of an early practice spin in turn three Friday morning.  The 18-year-old Joe Gibbs Racing development driver was very pleased with how the Venturini Motorsports team battled back from the adversity that they were dealt with earlier in the day to record a top-10 qualifying run.

“Tenth isn’t usually something you would usually have a smile on your face about, but considering we pulled out the backup car and didn’t get as much practice as our fellow competitors, I think it’s a solid showing,” said Coughlin.  “We have 80 laps tomorrow.  That doesn’t sound like a lot, but it really is a long time here.”

Saturday’s race at the Long Pond, Pennsylvania tri-oval will be Coughlin’s first career start on a superspeedway.  Despite having to battle adversity Friday afternoon, the Ohio native believes he learned a lot throughout the day about racing on faster tracks like Pocono Raceway.

“I’d say the biggest thing is just getting more comfortable to the speeds here,” Coughlin said.  “Going fast in a straight line is one thing, but when you have to finesse it around the corner that’s a whole different thing.  That took some time to get used to especially in the tunnel turn, but actually that’s turned into one of my strengths now.

“I learned a lot and I’m pretty optimistic about tomorrow and the rest of the year.”

Following his qualifying run, Coughlin was very thankful of all the hard work put in by his team, as well as the strong amount of support he receives from his family.

“After a day like today, I just have to thank God for surrounding me with great people,” said Coughlin.  The entire Venturini Motorsports Team, Joe Gibbs Racing, my mom (Di), my dad (John) and my sister (Kennedi) all make these types of things possible.  I’m very excited to have all of those people on my side for tomorrow’s race.”

Saturday’s ARCA Racing Series Pocono 200 will see the green flag at 1pm ET.  The race will be broadcasted live on FOX Sports 1 beginning at 1pm.  Cody Coughlin’s No. 55 JEGS.com Toyota will be carrying a FOX Sports 1 on-board camera for the 80-lap race.