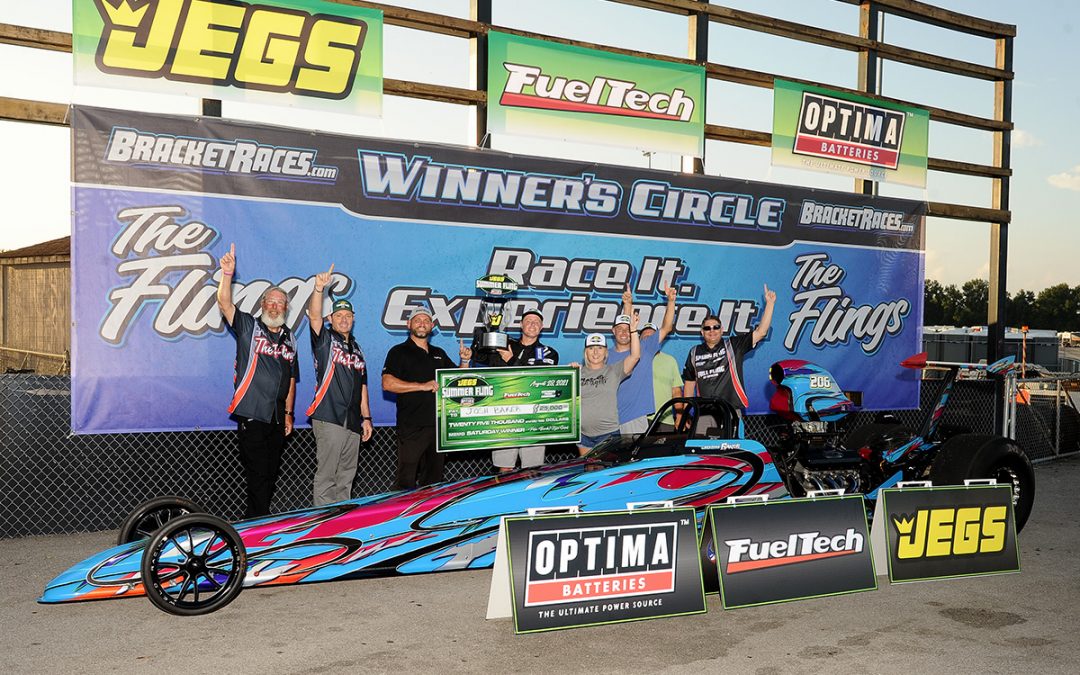 HEBRON, OH – The final day had arrived for the JEGS Performance Summer Fling presented by Optima Batteries at National Trail Raceway. FuelTech 25K Saturday would crown the last winner, the Kyle Seipel Never Give Up Award and the Todd Barton Best Appearing Car.

The night prior, Jeff Serra made history as the first driver to carry two entries into the final round at a Fling event during ATI Performance Products 100K Friday. The staff awarded him the Todd’s Extreme Paint MVP Award in the winner’s circle and he was presented with a custom-painted Impact Vapor helmet and $1,000.

The Kyle Seipel Never Give Up Award was also presented in Friday night’s victory lane to a racer who was on the Fling Team’s radar early in the week. Jon Talmadge (better known as Vega Jon) suffered issues with his motorhome on the way to the track and mechanical problems between rounds. He overcame adversity from several past accidents to partially regain the mobility to race his green ‘70 Nova. “The ‘never quit thing’ is a goal for me,” Talmadge said. “I wasn’t going to make it to Columbus. I wasn’t going to make it. So I made it.” His appearance in sixth round of the 100K event solidified the Fling Team’s decision to present him with the honor of receiving the first award in memory of the late Fling promoter Kyle Seipel.

For the last opportunity to take home an inaugural Summer Fling big check on Saturday, 260 drivers staged up for the first round of eliminations — 130 door cars and 130 dragsters. Meanwhile, the Fling Team visited the pit of Jacob and Kelly Meinert, the owners of a newly-built 2021 American Race Cars dragster to deliver the Todd Barton Design Best Appearing trophy and $500.

Due to popular demand, the Fling staff brought back the SERVPRO 10K Shootout for drivers who exited the 25K race early in the day. The 32-car field was made up of half door cars and half dragsters in similar format to Thursday’s shootout.

The field thinned to six cars at round seven. Lynch used a two thousandths advantage on the starting line and ran it down to a dead-on zero for the win over May, and Bear eliminated the ‘67 Nova Wagon of Coughlin Jr. with a .013 package. Despite York’s .006 bulb and .002 stripe he was locked out by the .003 package of Baker.

By way of a .002 light Baker earned the bye run in the semis, letting go .006 on his single. Bear and Lynch faced off to secure a spot in the final round and Bear let go .004 ahead of Lynch and took .008 to advance.

The last main event of the weekend saw Baker light up the scoreboard over Bear. Baker was .004 taking .001 to be .016 above the dial, reflecting his stellar performances throughout the day.

The final round of the SERVPRO 10K Shootout was the matchup of yesterday’s semifinalist Kevin Brannon in the Monza and the 2000 Undercover dragster of Justin Daniels. Brannon eliminated himself on the starting line after turning it .002 red, and Daniels ran it down to be dead-on seven for $10,000.

The next stop on the Fling tour is the last event of 2021 — the RAD Torque Fall Fling presented by Optima Batteries at Bristol Dragway September 28 – October 2. Racers can arrive and pay at the gate with no pre-entry required.