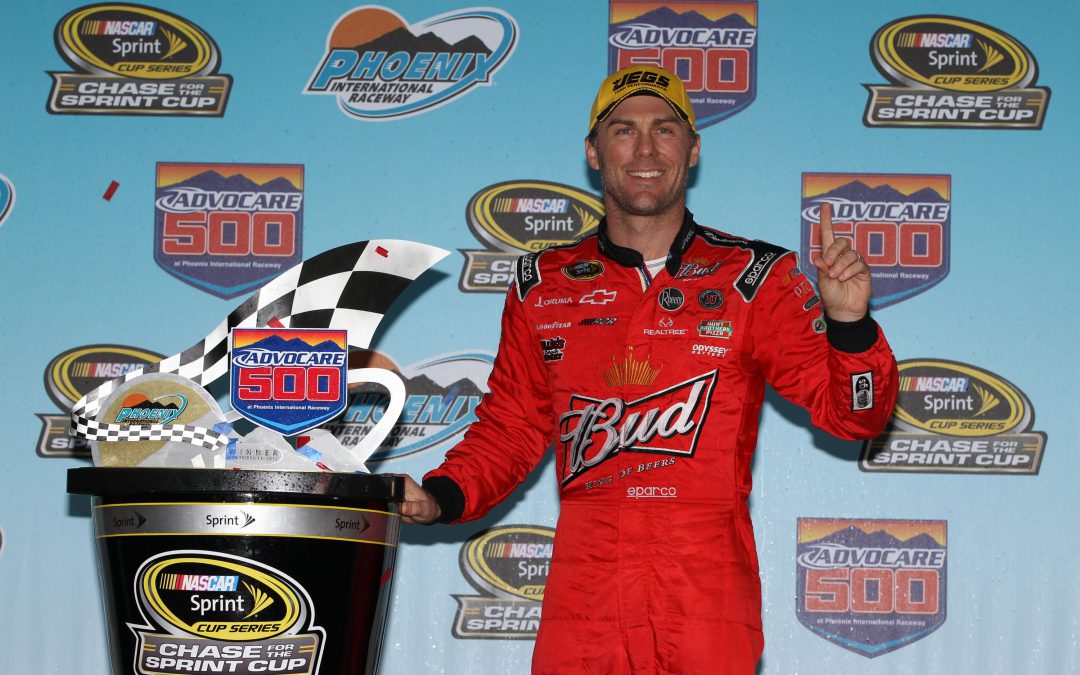 AVONDALE, Ariz. — Brad Keselowski has long since proven he's an elite talent behind the wheel and a glib, if somewhat irreverent analyst in front of the microphone.

Now we can add prophecy to his list of accomplishments.

We can also add fisticuffs to the repertoires of the Clint Bowyer and Jeff Gordon crews, who brawled in the garage after Gordon wrecked Bowyer and dashed his championship hopes on the next to last scheduled lap.

Never mind that Harvick crossed the stripe as a wreck erupted behind him.

The real drama was deeper in the field, and earlier, as Keselowski moved tantalizingly close to his first NASCAR Sprint Cup championship after predicting last Sunday that bad luck might be on the horizon for five-time champion Jimmie Johnson. The prediction came true — in spades—in the form of a wreck on Lap 234.

Harvick took the checkered flag ahead of Denny Hamlin, who passed Busch after the final restart. Busch came home third in a race that went seven laps beyond its posted distance of 312 laps. Kasey Kahne ran fourth, followed by Ryan Newman and Keselowski, who took back the lead from Johnson and leads by 20 points with one race left in the Chase for the NASCAR Sprint Cup.

Keselowski, however, was appropriately cautious when assessing his title chances.

"Certainly if you have the choice, you always want to be in the lead of the points, especially in the closing races, so I'm thankful for that," said Keselowski, who can win the Cup championship outright with a finish of 15th or better in next Sunday’s season finale at Homestead.

"But I also know that the troubles that they had are the same troubles that we could have next week, and so you try not to take anything for granted. You try to just focus on what lies ahead, and we've got to do the best job we can at Homestead. That's where my focus is."

All other drivers were mathematically eliminated from title contention, including Bowyer, who was the victim of retaliation from Gordon for an earlier incident in which contact between their cars cut Gordon’s left front tire and sent him sliding into the Turn 3 wall.

"There can be distractions," said Harvick who broke a 44-race drought in winning for the 19th time in the Cup series. "There can be whatever happening around the race track, off the race track, but when you get in that garage and everybody is doing their jobs — I get in the car, he (owner Richard Childress) is up on the trailers — we're all just racers in the end. We want to race cars, and it comes with a lot of media. It comes with a lot of things outside of the race track.

"But when we actually get to get into our element, we all do our jobs regardless, and we all don't want to go out and embarrass ourselves and not run good. We want to be exactly where we are, right here, talking to you guys after the race and in Victory Lane and doing the things that make us all happy. It's been a frustrating year, but two races to go, here we are."

The biggest, most destructive bolt of ill-fortune in Johnson's already storied career struck on Lap 234, when the right front tire on Johnson's No. 48 Chevrolet exploded — the result of a melted bead (the edge of the tire that sits on the wheel) due to brake heat. Johnson smacked the Turn 4 wall.

Unlike at Kansas, where Johnson's crew was able to repair a wrecked car without losing a lap, the 48 was damaged far beyond the healing power of a pit road band-aid. Johnson spent 38 laps in the garage before returning to competition just as David Ragan's brush with the wall on Lap 273 caused the fifth caution of the race.

Busch led four times for 237 laps but surrendered the lead to Harvick after a restart on Lap 305 and never got it back.

"The guys gave me an awesome piece, and unfortunately there, I gave the race away," Busch said. "I hate it for my guys, and they worked so hard and they dug hard this weekend, and obviously having a car that's the class of the field, you expect to win and you're supposed to win, but I guess I just didn't know how to win it today."