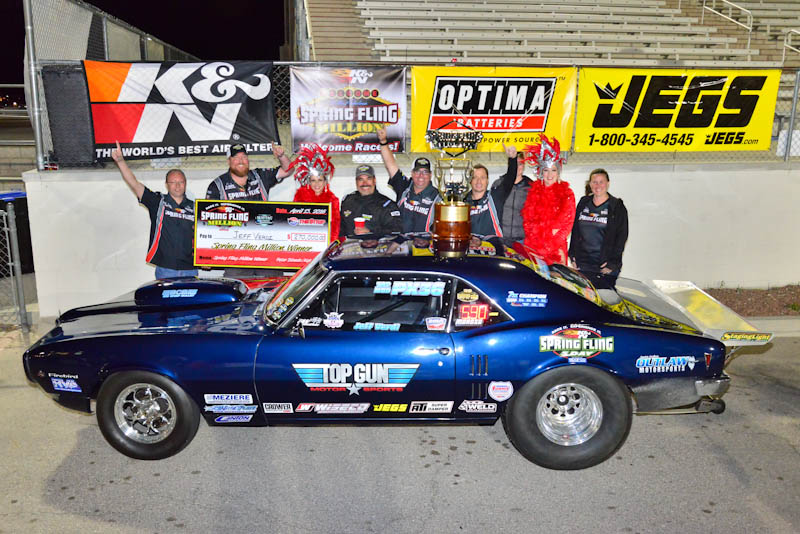 After Friday’s Million Dollar race at the K&N Spring Fling Million presented by Optima Batteries, one lucky person next year will have a very special April 15, 2017 to look forward to… or maybe not. It’ll be the day the IRS will be looking for their due after that person’s big win in what will certainly be a life-changing experience as the first winner of the K&N Spring Fling Million. That might sound like sort of a “buzz kill,” as announcer Nate Hirschi said, but it will be a good one to concern one’s self with.

The week so far has gone without hiccups except for some very long days, but nonetheless clean and green all the way. The plan for today was one time trial followed by a special Brodix Run for the Money where a perfect package gets that person a cool $100,000 to get the party started. Unfortunately, no one had that perfect run but the Best Package was Alabama’s Jared Pennington with a .003 run, which earned him a set of SR20 cylinder heads from Brodix.

Besides the entry window open for Million Dollar race entries, the Last Man Standing raffle also took place. The concept is that anyone; racers, crew, fans, etc. but limited to 200 entries; can enter a raffle for $50 whereby a Million Dollar racer’s name is placed in a hat. Each raffle entrant then pulls a name out of the hat. If their racer goes the furthest in competition, the lucky person wins $10,000.

“We came up with the Last Man Standing because we want everyone involved with this special day,” says co-promoter Peter Biondo.

Prior to the first round, co-promoters Biondo and Kyle Seipel offered their words of thanks to all of their customers and friends. And with the traditional Star Spangled Banner and Racers For Christ invocation sung and spoken, the last step was the cutting of a ribbon to open the track for the 270 entrants in the very first K&N Spring Fling Million; an event that will pay some lucky racer $270,000 to win by the end of the day.

Las Vegas weather usually sees about 310 days of gorgeous sunshine. The previous weekend found about two inches of rain fall on the track which bode well for Spring Fling days. With sunshine so far all week, Friday found high winds and sprays of moisture every once in a while. This forced eliminations to be held up from time to time, but the show went on.

Normally high dollar bracket races involve only one class of cars; in this case Super Pro. But for the past three years, the Pro class cars have been included and supported the Spring Fling well. That fact had Biondo and Kyle enact a Pro 32 class which included 32 pre-entered cars which ran all by themselves until a winner was chosen. At that point the winner was seeded directly into the sixth round of the Super Pro class. That winner tonight on Million Dollar Friday was Paul Russell in his Nova over Justin Lamb’s Super Stocker.

The lucky bye run to advance to the semifinals went to Beedy and his GTO door car. Dicken took the best of Ross, Brannon defeated Carter and in a door car versus door car battle, Verdi beat Russell.

The semifinals would pit door car versus dragster in both halves. In the first set, Beedy ended the hopes for his win when he red-lighted to Dicken, and then there was Jeff Verdi. The Virginia racer made the tow out west on an open trailer breaking down at times along the way, earned an entry into the field by winning one of the many raffles for the Million Dollar entry, and by defeating last night’s runner-up Brannon, he’s eligible to become the very first Spring Fling Million Dollar winner.

In the final round, all that “Vegas-style luck” came in handy for Verdi who used a .014 reaction time coupled with dead-on the dial with a “1” to turn back Lane Dicken’s .009 reaction time and .017 over the dial.

“Unreal,” is about the only thing Verdi could say. “I’ve got to thank the Lord. I was praying every round and thanking the Him each time. I don’t even know what to say. It’s just unbelievable.”

One more day left to crown a $20,000 winner of the K&N Spring Fling, Madcap Racing Engines Saturday. Continue to stay tuned to www.bangshift.com for all the live action with round by round results at www.dragracecentral.com.