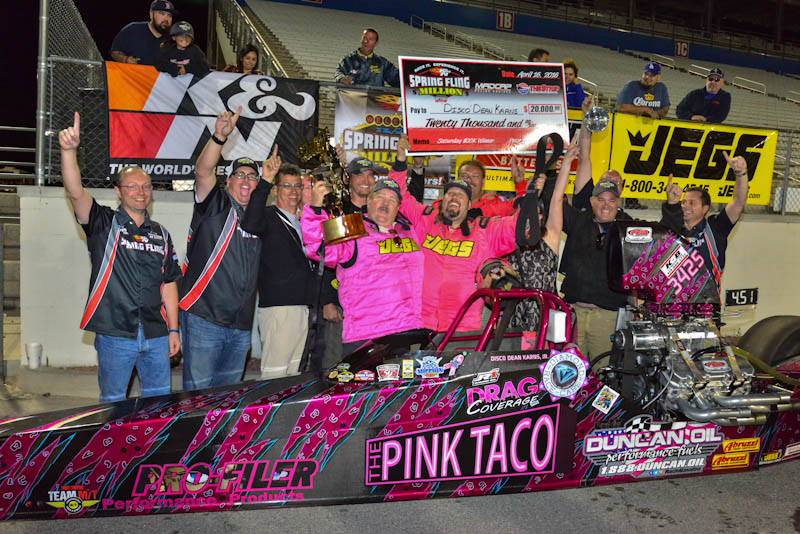 Day last has finally come to the K&N Spring Fling Million presented by Optima Batteries. It all began on Tuesday with the Yukon Gear & Axle test and tune session along with the Poulsen Trailer Shootout won by Tennessee’s Scott Lemen.

Three more Spring Fling champions were crowned including last night’s Million Dollar race winner Jeff Verdi. Saturday called for race No.4 with a $20,000 to win payday for someone. Weather all week for the most part cooperated except for Friday when 40 to 50 mph winds cropped up with occasional sprays of moisture which is highly unlikely for Sin City. It all held up enough to finish the Million Dollar event late on Friday followed by winner Verdi and crew enjoying a stay in a suite at the Cosmopolitan Hotel in downtown Vegas courtesy of the K&N Spring Fling. The stay might not have been such a good idea as in the first round of Saturday’s event, Verdi red-lighted by .002, but still ending his week on a good… make that a great note.

After thousands of run down the track, it came down to eight cars left for the last $20K to win of the weekend. Steve Casner, Robbie Gear, Paul Nero, Disco Dean Karns, Kenny Underwood, Andy Taylor, and Top Fuel pilot Shawn Langdon who was left in with two entries going into round seven.

In the quarter-final round, Disco Dean defeated Underwood, Taylor red-lighted to advance Casner, Nero took out Langdon’s door car entry but Langdon got revenge with his dragster entry in defeating Nero.

For the semifinals, Casner ended Langdon’s day and Karns used a .014 reaction time and a dead-on the dial with a “9” to defeat Nero.

“This is great and we’re gonna’ be partying downtown tonight as long as we can find a casino that’ll cash that ‘big check’,” said Karns.

“We can’t thank enough all of the racers and our family of friends who have supported our dream here in Las Vegas,” said co-promoter Peter Biondo. “It’s definitely our pleasure and we can’t wait for next year’s K&N Spring Million when we’ll be able to do it all again.

“We’re thrilled that this was such a successful event,” Biondo added, “but success for us is defined as everyone having a good time and being able to finish each and every race, which we did. By those standards, yes we are thrilled.”