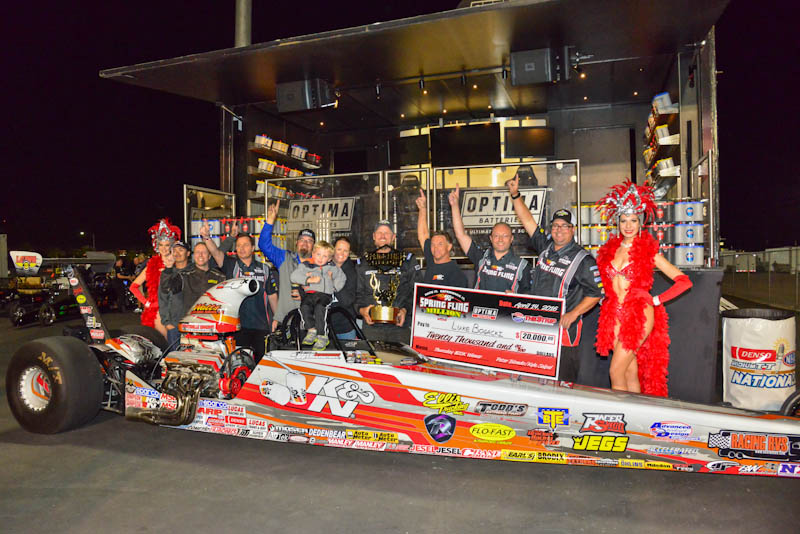 Day two of the K&N Spring Fling Million presented by Optima Batteries came after a long night for Wednesday’s race. That race, won by Tim Markoglu consisted of nine rounds of eliminations taking roughly twelve and a half hours to complete; a good problem to have when you have 511 cars make the first round.

Thursday’s $20K to win event began with eliminations at 8:00 am with another four and half hour first round that saw 512 cars hitting the starting line. Thirteen hours after eliminations began, 12 cars remained with only 11 drivers as according to the ladder, J.R. Lobner was still left in with both of his entries. As fate would have it, Lobner would have to race… Lobner, which naturally advanced him to the round of six. The other contestants would be Chuck Hawk Jr., Disco Dean Karnes, Russell Stryker, Luke Bogacki, Tommy Dutcher, Tony Marconi, Kevin Brannon, Dave Umberger, Lane Dickey and Jeg Coughlin.

The winners of that round moving to the quarter-finals would be Karns, Bogacki, Dutcher, Dickey, Brannon and naturally Lobner. With six cars left, there will be a bye run in the semifinals based on the best winning reaction time which in the case of the round, went to Bogacki with a .002 reaction time. In the balance of the round, Brannon defeated Dutcher and Lobner took the win over Karns.

For the chance to meet up with Bogacki, Lobner took the reaction time advantage but ran out to hand the win and the chance for $20K to Brannon.

For the final round, Bogacki took the reaction time advantage and never looked back, taking win with a dead-on the dial with a “5.” Brannon also ran dead-on but it was the reaction time which made the difference.

“The last couple of months have been sort of surreal,” said Bogacki, “and then to come to Vegas and win an event like this…unbelievable. I’m so thankful for K&N and all the sponsors and the ‘Fling staff.”

Friday is the big day with the Spring Fling Million to be contested. A preview video of the day can be found at https://youtu.be/c6PzqsAX46k. One time trial will be allowed for each competitor followed by eliminations. A special Brodix-sponsored Run for the Money will also take place whereby competitors place a dial-in on their car for the time shot. The amount over your dial-in when combined with your reaction time becomes your total package. Best Package awards will go to the best first, second and third place; however, a “perfect run” which amounts to a perfect reaction time and dead-on your dial with a zero will be awarded $100,000. Not a bad payday for one run.

There are also plenty of other special surprises on tap for all on Friday followed by the Sparco Racer Appreciation Party held at night. Stay tuned to all the action live as it happens on www.bangshift.com with round by round results at www.dragracecentral.com.