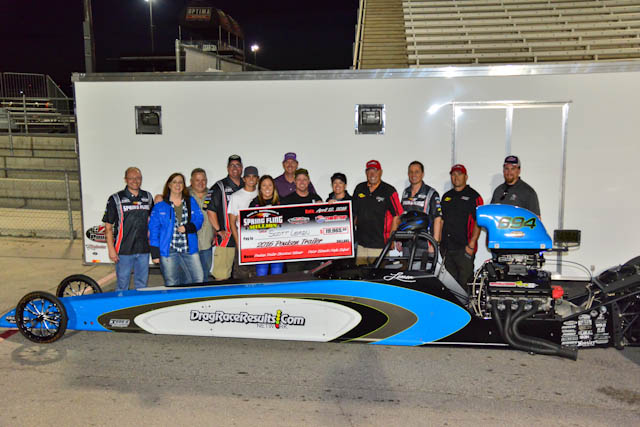 After a weekend that saw over two-inches of rain fall on The Strip at Las Vegas Motor Speedway forcing the cancellation of the NHRA Lucas Oil Drag Racing Series, the sun shined bright for the opening day of the K&N Spring Fling Million presented by Optima Batteries.

Today’s schedule calls for the free test and tune session sponsored by Yukon Gear & Axle followed by the Poulson Trailer Shootout whereby 32 pre-entered racers will contend for a brand new trailer valued at $20,000 and the runner-up receiving an entry to the 2017 K&N Spring Fling Million race. Semifinal losers won’t go home with empty pockets as they will receive free entry into the 2017 ‘Fling support races.

By the time the gates were closed on Monday night for parking, over 450 racers had entered to compete in the three support races to be held Wednesday, Thursday and Saturday. Friday is reserved for the Spring Fling Million Dollar race which will definitely change the life of one lucky racer. By close of day on Tuesday, close to 500 racers took part in the Yukon Gear & Axle Test and Tune.

This is also the official rollout of the new TruSTART Worst Red-Light system, a product of Compulink and the Spring Fling. It settles the debate once and for all where the person with the worst red-light loses regardless of his dial-in, leaving first or last. The first reversal of fortune came early in the first round of the Poulson Trailer Shootout when Bob Halina came up against Vinny DiMino. Halina was dialed a 4.66 against DiMino’s 4.74. With DiMino getting the head start, he red-lighted by .005 which would have normally given him the Lose ticket, but Halina lit the red bulb by a worse .018 handing the win to DiMino.

In the Poulson Trailer Shootout, four remained in the semifinals; Former Spring Fling winners Peeps Pennington and Scott Lemen, along with Dustin Hentges and Cecil Hankins.

At four cars, Hentges used a .006 reaction time and a .005 over his dial to turn back Hankins. In the other half, Lemen turned Pennington away with a .005 reaction time.

With racers from roughly 35 states in the union including two other countries (Canada and Mexico) the final round for the Poulson trailer was Tennessee (Lemen) versus Washington state (Hentges).

With both drivers wearing matching dial-ins of 4.78, Hentges left with the better reaction time but gave up the finish line early to hand the win to Lemen.

On Wednesday, time trials begin at 8:00 with eliminations set for immediately after one time trial with $10,000 to the winner on the line. Follow the results live at www.bangshift.com with round by round results at www.dragracecentral.com.