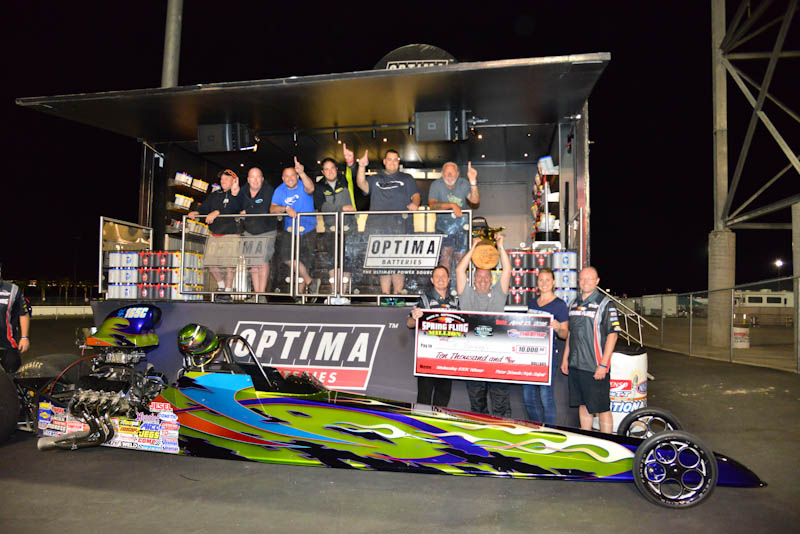 Three years ago co-promoters Peter Biondo and Kyle Seipel added the K&N Spring Fling Vegas event three years ago to their successful Spring Fling even held in May in Bristol, TN. Not knowing just how many racers would support their race, they decided to (pardon the “Vegas” pun) hedge their bets and add the Pro class of cars to the normally one class run at typical high dollar bracket races.

“The Pro class is pretty popular here on the west coast,” says Seipel, “so it was only natural for us to run them in Vegas, and for the past three years we’ve had great support from those racers. With the introduction of the K&N Million this year, our first assumption was that we might not have the time to run both classes should we receive the type of car count we anticipated.”

The only alternative was to just limit the race to one class, Super Pro. But there is little doubt that Biondo and Seipel were concerned.

“We haven’t forgotten about our Pro class friends though,” says Biondo. “Just like we have done with our other concepts; we came up with our Pro 32 class which involved pre-entry into that field. Thirty-two Pro class cars will run their own race after which the winner will be seeded directly into the sixth round of the Super Pro field.”

Any concerns though were put to bed as when the gates closed on Tuesday night, 502 tech cards were sold for the K&N Spring Fling Million presented by Optima Batteries.

A free test and tune session took place on Tuesday with Scott Lemen winning the Poulson Trailers Shootout but Wednesday dawned with more great weather. One time trial session was slated for all competitors with eliminations starting immediately afterward. With that many cars, round one of eliminations can be quite agonizing; especially if you lose; but in any event the first round took a lengthy four and a half hours. Once the smoke cleared from that, the official count of cars was a new Spring Fling record of 511.

The final was sort of anticlimactic as Wickell lit the red-light by .010 to hand the win and the $10Gs to Markoglu. “I’ve never raced on the eight-mile before and it’s pretty tough,” said Markoglu, “but right now I’m having the time of my life.”

Thursday’s schedule calls for no time trials and eliminations beginning at 8:00 am. Follow the results live at www.bangshift.com with round by round results at www.dragracecentral.com.