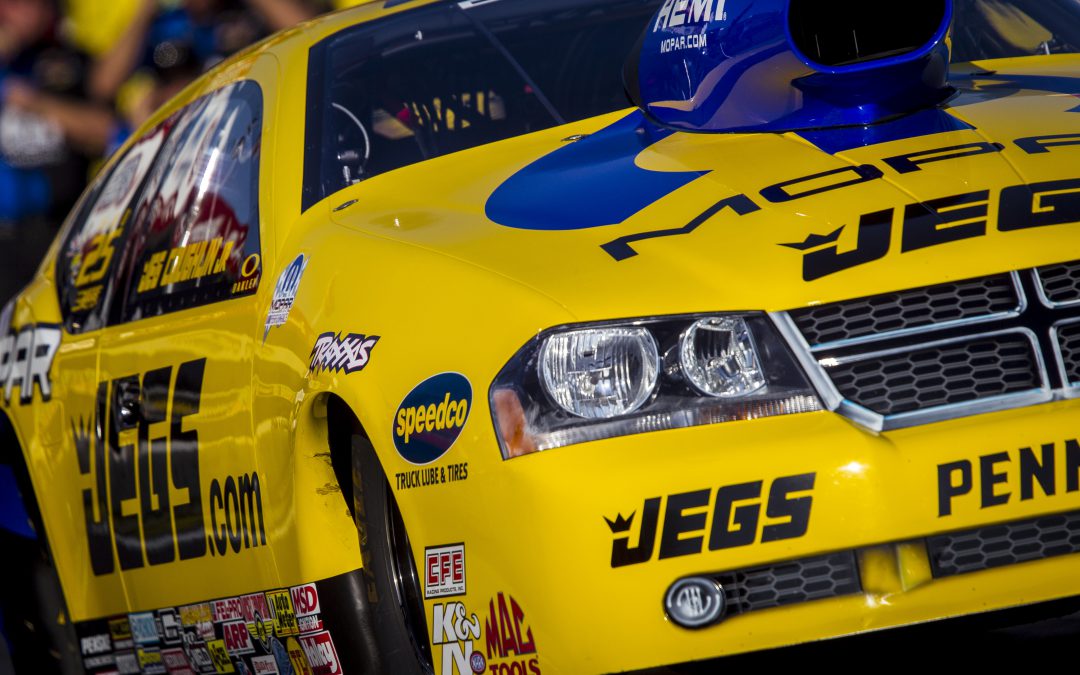 TOPEKA, Kan. (May 18) – Jeg Coughlin Jr.'s JEGS.com/Mopar Dodge Avenger has consistently been one of the top cars in Pro Stock this season and the team's fourth-place qualifying effort at the NHRA Kansas Nationals proved the point yet again.

"It feels real good right now," Coughlin said. "We've been working on our total package, trying to put it all together: from the pits to the racetrack to the driving to qualifying to turning the win light on Sundays."

Coughlin had a best pass of 6.633 seconds at 208.46 mph, missing on third place by just a fraction of his top speed as teammate Allen Johnson had an identical ET but got the third position thanks to a mph of 208.62.

"I'm happy with the way we've started here at Heartland Park," Coughlin said. "We were second in the first session and fourth the other three runs. I'm real confident the car is going to continue to perform well, and I feel great behind the wheel. I like the total package we've brought to the track this weekend.

"We're really not changing a whole lot on the car. It's got some small inefficiencies we're just trying to tweak, but we don't want to upset the apple cart. We really feel like we've got a car that can go the distance."

Coughlin squares off against No. 13 qualifier Greg Stanfield in the first round of eliminations Sunday morning. Coughlin and Stanfield both have reputations for having some of the best reaction times in the class, and Coughlin said he'll be ready for a strong test from his friend.

"You know deep down you have to be on your best behavior," Coughlin said. "Ultimately you have to stick to your game plan. I feel like I've got a pretty good game plan with the JEGS/Mopar Dodge for tomorrow and that round in particular. We'll give it a go and see how we do."

With two round wins on Sunday Coughlin will hit 500 Pro Stock rounds wins for his illustrious career.

"You try not to look too far ahead because when you do it can often get you into trouble," Coughlin said. "I hope that milestone happens tomorrow, and I also hope it's a milestone on the way to our first win of the season."

Eliminations for Sunday's NHRA Kansas Nationals get under way at 11 a.m. CDT from Heartland Park Topeka.