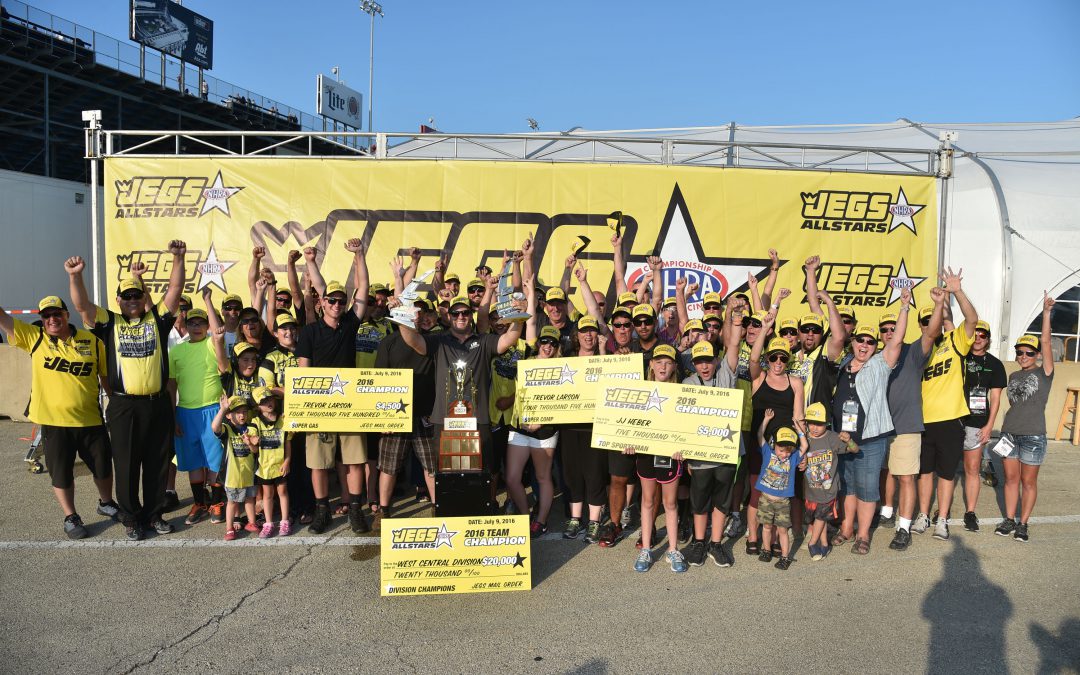 Trevor Larson became the first driver in the 32 year history of the JEGS Allstars event to double up with wins in Super Comp and Super Gas. Larson’s two victories help lead the team from the NHRA North Central Division to their second overall team title in the last three years in the prestigious event that features NHRA’s best Lucas Oil Drag Racing Series sportsman drivers.

Larson, who also won a JEGS Allstars title in 2014, won the Super Comp class in his dragster with an 8.93 run to stop Division 4 racer Austin Williams, who broke out with an 8.88 on the 8.90 index. Larson, of Starbuck, Minn., completed the historic feat when he drove his Corvette to the Super Gas title over Division 7 racer Mike Wilbishouser. In that final, Larson’s 9.96 won over Wilbishouser’s 9.89 breakout.

Heber, of Centennial, Colo., drove his Mustang to a win in the Top Sportsman class after Division 1 racer Michael Cerro broke on the starting line with his ’63 Corvette. The Division 5 took an early lead after five of its eight members advanced into the second round of eliminations.

Troy Galbraith of Indianapolis, Ind., claimed the Comp Eliminator title behind the wheel of his dragster when he stopped former world champion Alan Ellis in the final round. Galbraith trailed at the start, but won the final with a 6.79 elapsed time on his 7.38 index.

Top Dragster winner Joe Hessling of Toledo, Ohio was also a big contributor for the Division 3 team. Hessling was almost perfect at the start with a .004 reaction time and ran a 6.34 on his 6.31 dial to stop current Top Dragster national points leader Steven Furr, who lost on a breakout.

Division 4 racer Slate Cummings won his fourth JEGS Allstars title since 2011 when he defeated former world champ Don Keen in the Super Stock final. Cummings, of Hammond, La., drove his Moser Engineering Cavalier to a 9.15 on his 9.14 dial-in for the victory after Keen missed his 10.45 dial with a 10.51..

Mick Alley of Eagle, Idaho earned the lone win for the Division 6 team when he beat Jeff Hairrington of Division 2 in the Stock final. Alley won with a 10.28 on his 10.25 dial. He is the husband of former Super Stock world champ Jackie Alley.

Jonathan Anderson of Griffin, Ga., was crowned the Super Street champion after running a 10.91 in the final round over Division 1 racer Keith Mayers. Anderson, who has three wins this season in divisional competition, won with a 10.91 after Mayers broke out with a 10.88.

Western Region racer Chris Demke and Shane Westerfield helped lead a rout in the Top Alcohol portion of the JEGS Allstars with victories in Top Alcohol Dragster and Top Alcohol Funny Car, respectively. Demke beat reigning national champ Joey Severance in the final 5.26 to 5.27 while Westerfield used a starting line holeshot to beat Kris Hool of the Division 5 team, 5.63 to 5.57. The Western Region finished with 900 points while the Central Region was a distant second with 400 points.

Each of the champions in the JEGS Allstars will now be eligible for a “double-up” bonus if they can also win tomorrow’s K&N Filters Route 66 Nationals titles. At this point the drivers who are still in competition and eligible for the bonus are Demke, Westerfield, and Galbraith.