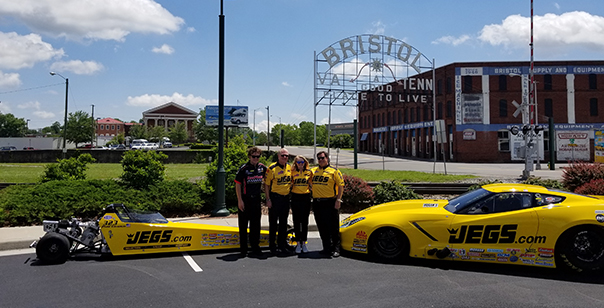 Several members of one of the most iconic families in NHRA Championship Drag Racing history – the Coughlins – joined officials from Bristol Motor Speedway and Dragway today at the historic Bristol Train Station to officially launch the countdown to the NHRA Thunder Valley Nationals weekend.

The premier NHRA national event that visits Bristol Dragway each Father's Day weekend is only 16 days away. The race, the 11th of 24 events in the NHRA Mello Yello Drag Racing Series, will bring the 330-mph thundering Top Fuel dragsters and Funny Cars, along with 200-mph action in Pro Stock, Pro Mod and Nitro Harleys. Many of the area's local racers will also compete in several of NHRA's Sportsman categories. The race, held June 16-18, will be televised to a national audience on FS1, including qualifying shows on Friday and Saturday and a three-hour finals show on Sunday.

Four members of the Coughlin clan, including patriarch Jeg Coughlin Sr., his son Troy Coughlin Sr., and Troy's children, Troy Jr. and Paige, were on hand to provide a preview of the race weekend and talk about how special this race is to their family, given it is held on Father's Day weekend.

Troy Sr., who provided the local media in attendance with a demonstration of his sleek yellow and black turbocharged JEGS.com Corvette by firing it up in front of the well-known Bristol sign, will compete in Pro Mod and Troy Jr. is a rookie this season in the highly-competitive Top Fuel category. Troy Sr.'s brother, Jeg Jr., also will compete during the weekend in the Pro Stock class.

Troy Jr., 26, who is still looking for his first career Top Fuel victory, said it would be unbelievable if he and his dad ended up celebrating victories together in Bristol's winner's circle on Father's Day.

"It's really something that I've thought about since I was five," said Troy Jr., who drives the SealMaster dragster for Kalitta Motorsports. "You might have to pinch me there. It doesn't get any cooler than that. That's a story for the books right there. We definitely have the opportunity. Both cars are certainly capable and we both have great team members behind us. The facility is going to be awesome like it always is, so we are excited about it."

Jeg Sr., who started drag racing in the late 1950s and opened the JEGS Automotive company in 1960, said the family has enjoyed a lot of success at Bristol Dragway over the years and he enjoys coming to the area each year and spending Father's Day here cheering on his sons and grandson.

"It's been extremely exciting for me," Jeg Sr. said. "Drag racing has been the piece of equipment that we've used all of our life to keep our family excited with each other and working together and it's been an absolute thrill for me to see how it has developed over the years. When Father's Day rolls around the family has been so close and it's been fabulous."

Jeg Sr. competed in Top Fuel in the 1960s and '70s and gave the racing bug to his four sons, who have in turn continued the family racing legacy by igniting that racing spark in their children. Troy Jr. said he was inspired to race in Top Fuel by watching videos on YouTube of his grandfather competing in the class back in the day. After having success in a variety of sportsman classes and Pro Mod, Troy Jr. says making the transition to Top Fuel has been a challenge, but also a lot of fun.

"It's a world of difference," Troy Jr. said. "Everything I've ever driven is so much different from a Top Fuel dragster. It's going from zero to 1,000-foot in 3.7 seconds and the rate of acceleration is incredible. The wheelbase of the car is so much longer. It responds so differently and I've been learning and adjusting to the changes. It's a big honor for sure."

The rising star of the racing family is Troy's daughter Paige, 16, who fired up her JEGS.com Jr. Dragster alongside her father's Pro Mod today. She recently started the licensing process in Super Comp dragster and is looking forward to climbing through the ranks of NHRA competition.

"There's no place I'd rather be than at the race track with my family, it's so much fun," said Paige, who expects to compete here in July at the NHRA Junior Drag Racing League Eastern Conference Finals. "My dad gave me the opportunity to run a Jr. Dragster a few years ago and I was also showing horses nationally for a while. Then last year I tested my cousin Jack's car and I just fell in love with it all over again and it got me hooked and I love it. It was a rush to run the Super Comp dragster last week. It was awesome. There are no words to describe it. Hopefully we will be able to go to some races this year. It's been a process learning all about the car and it's really different than the Junior, so there's a lot to learn. Fortunately I am learning from the best with my dad, brother and uncles. Next year I will be old enough to hopefully go race at some national events and we'll just go from there."

NHRA Thunder Valley Nationals qualifying will feature two rounds at 5 and 7:30 p.m. on Friday, June 16 and the final two rounds of qualifying on Saturday, June 17, at 1 and 3:30 p.m. Final eliminations are scheduled for noon on Sunday, June 18.

To purchase general-admission or reserved seats, call Bristol Dragway at (423) 989-6900. Tickets also are available online at www.bristoldragway.com and can be purchased in the Tri-Cities region at any Food City grocery store. Kids 12 and under are free in general admission areas with a paid adult on Sunday.