Lights, Camera & Plenty of Action for Coughlin in Daytona 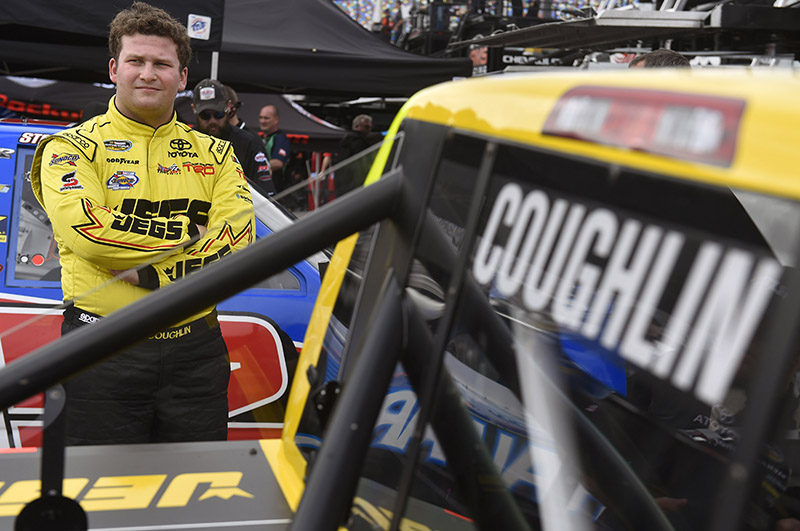 Friday’s NextEra Energy Resources 250 for the NASCAR Camping World Truck Series at Daytona International Speedway (FL) was a wild one for all involved, but when the dust settled Cody Coughlin had passed more than a 100 trucks during the race and scored his best NASCAR finish to date.

Coughlin started the 100-lap race in the 17th position and finished 11th.  In Friday’s kickoff to the 2017 season at Daytona, the Ohio native had 113 quality passes, according to NASCAR statistical reports, which ranked second among all drivers.

The 21-year-old driver sustained minor nose damage in a 17-truck crash on the second lap of the race.  His ThorSport Racing team worked hard throughout the event to patch up the damage as best possible.

Even with the damage, Coughlin was able to race with the lead pack in the draft and at one point found himself as high up as sixth.

Coughlin was knocking on the door of a top-five result on a Green-White-Checkered finish before being caught up in a last-lap crash on the backstretch that saw his teammate Matt Crafton get airborne and flip before landing on all four wheels.

Coughlin managed to drive his damaged vehicle back to pit road after the crash.  Coughlin was credited with an 11th place finish in his debut with ThorSport Racing.

“I thought we had a really strong JEGS.com/RIDE TV Toyota Tundra that sucked up really well in the draft,” said Coughlin, a Joe Gibbs Racing Development Driver.  “Some guys got crossed up early in the race and caused a wreck and we got a bit of damage.  My guys did an awesome job fixing it every time we came down pit road.  We’d start at the rear of the field and then work our way back.  I’m real confident that we could have scored a top five if it wasn’t for that wreck on the backstretch, but that’s kind of how things go here. You just have to expect that it’s going to happen.”

Overall, Coughlin said he was very happy with his first race for ThorSport Racing, even though it was an eventful one.

“Working with my new crew chief, Michael Shelton, was great this weekend.  We got along great at the shop and that just carried over into our first race together.  It was also great having Terry Cook on the roof spotting for me.  He was a calming presence on the radio tonight, as well as a voice of encouragement.  I’m really excited for the rest of the season working with the whole ThorSport team.  I can’t thank Duke and Rhonda Thorson enough for giving me a chance to drive for them this season, and I also can’t thank God enough for keeping me safe tonight.”

Coughlin will be back on track on Saturday, March 4 in the Active Pest Control 200 at Atlanta Motor Speedway (GA) at 4:30 p.m. ET.  He will be driving the JEGS.com no. 13 Toyota Tundra for ThorSport Racing as he continues his quest for Sunoco Rookie of the Year honors.