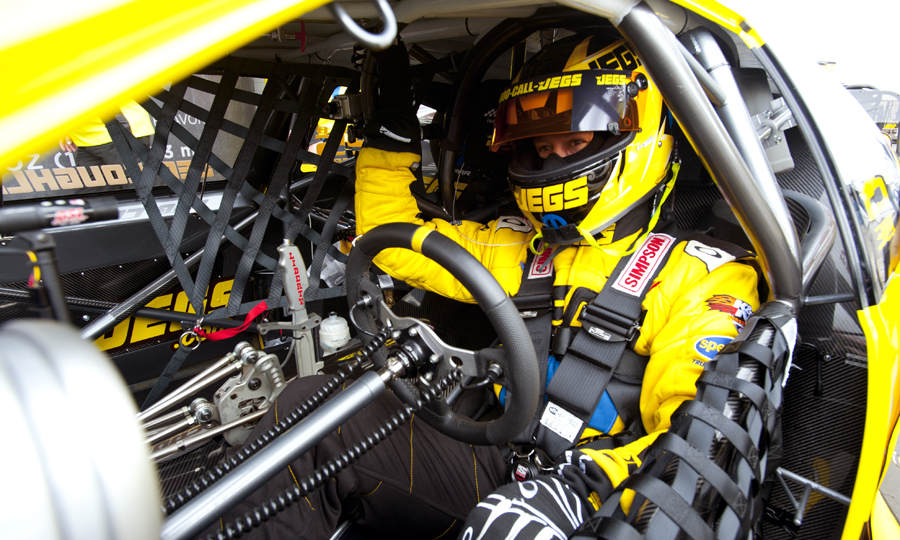 SEATTLE (August 5) – As race day dawned at Pacific Raceways on Sunday, Jeg Coughlin Jr. and the JEGS/Mopar Dodge Avenger team were pouring over their data trying to come up with right combination for a first round win at the O'Reilly Auto Parts NHRA Northwest Nationals.

"We were scrambling, actually," Coughlin said. "We didn't qualify that well and didn't get many consistent runs this weekend.

"We made an engine change feeling that our acceleration wasn't as good. Our top half numbers were good and we thought the swap would help us down low."

With the different motor, Coughlin was set for his first round race against Jason Line. Coughlin got a good jump at the line (.039 seconds to Line's .061) but it all went downhill from there.

"When you look at the run we just made, it definitely accelerated quicker, but that's what came back to bite us," Coughlin said. "We might have been better off with the other engine that didn't accelerate as well. That crossed our mind too. We knew we were going to have a hot track and be behind the fuel cars for the first time.

"We just weren't able to put all the pieces of the puzzle together to get a competitive car against Jason."

Qualifying in the top half was also important in Seattle as all the Pro Stock cars with lane choice were winners in the first round Sunday.

"It looked like a lot of cars struggled with the right lane," Coughlin said. "Both the pair in front of us and the groups behind us had trouble. It's no excuse, but this place is typically been a left lane track.

"We knew that going in and that's where finding that consistency in qualifying is so important for a solid weekend overall."

Coughlin and JEGS/Mopar Avenger team will regroup and be back for the Aug. 17-19 Lucas Oil NHRA Nationals in Brainerd, Minn.