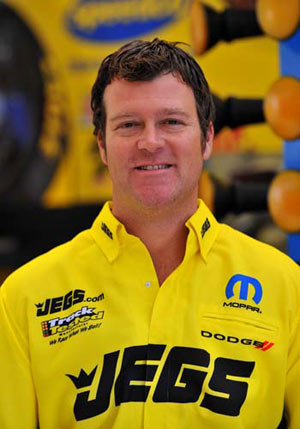 NORWALK, Ohio (July 7) — Local favorite Jeg Coughlin Jr. was all smiles at the conclusion of Pro Stock qualifying after earning the No. 10 spot in the elimination field for his JEGS.com/Mopar Dodge Avenger.

“Q4 was probably our best run of the pack, ET wise,” Coughlin said of the fourth and final qualifying session. “We’ve been running really good speeds all weekend, top-five in Q1 and Q2 and the K&N Horsepower Challenge, which tells us we’ve got other fish to fry than the motor side of things. We’ve got the power.

“Eddie (Guarnaccia, crew chief) and the team went to work on getting the efficiency of the car a little bit better. A day late, a dollar short, as far as the K&N Horsepower Challenge is concerned, as we lost in Round 1 of that deal, unfortunately, but we still found some things to get a little more bite in the car in Q4 there and that will translate to tomorrow.”

Fighting off unusually high temperatures and oppressive humidity, Coughlin clocked a best run of 6.718 seconds at 206.07 mph to set-up an interesting first-round match-up with Erica Enders, the NHRA tour’s most recent winner.

Enders’ earned lane choice by a slender margin after running slightly better than Coughlin in qualifying — 6.708 at 205.13 mph — but overnight weather changes could change the playing field enough to make it an even affair.

“There’s a lot of optimism going into tomorrow,” Coughlin said. “It’s supposed to be a little bit cooler tomorrow with a little bit of cloud cover, and that will challenge the crew chiefs. It’s a little easier to get more aggressive when it’s slightly cooler than to de-tune things in the heat. We could’ve tuned up Q4 a little bit more, and that gives us a little more confidence, another shot in the arm, heading into race day.

“There’s definitely a lot of yellow-and-black JEGS hats coming through the gates and cheering us on, and that’s exciting. It’s obviously different than racing for 25 years at National Trail Raceway but the fans still flock to their Ohio NHRA race and root us on.”

Eliminations are slated to begin at 11 a.m. EDT, Sunday, with Pro Stock taking to the track around noon.