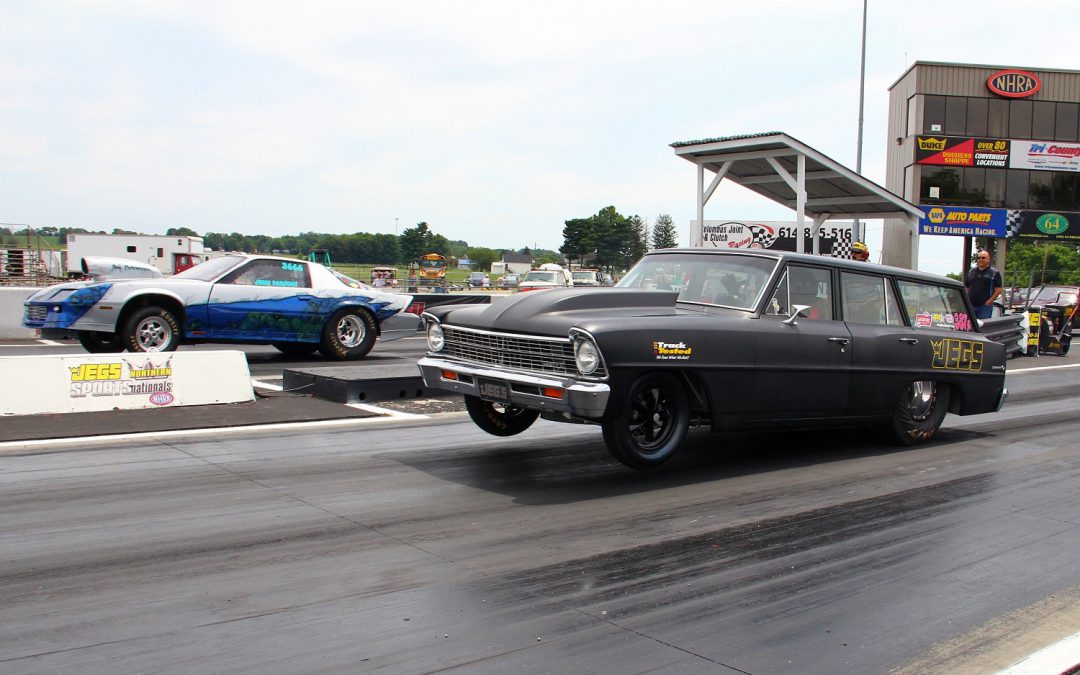 HEBRON, Ohio (July 21) — Although they were competing for the first time in their respective categories, sisters Meghan and Kelly Coughlin turned in the most memorable performances of the Buckeye Fuel Wars Lucas Oil Drag Racing Series event at National Trail Raceway.

Making her Sportsman debut in her Uncle Jeg Coughlin's Chevy II wagon in the Super Street category, Meghan got things started Friday night in the special Moser Shootout, which included competitors from all of the Super classes. The 26-year-old, who last raced nearly two decades ago in a Junior Dragster, managed to reach the semifinals before rain washed out the remainder of the action. Her and the other semifinalists eventually decided to split the pot four ways.

"Just getting a single round win was my goal for the weekend, honestly," Meghan said. "My emotions were really high and I was thinking about a million different things when I pulled up there for the first race. Fortunately, once I fired up the car and did the burnout, all of that went away and I was just super focused on the race.

"It would have been fun to race even more to see what would have happened but the rain wasn't about to stop so we just called it a night. Still, I was so excited. Tony Collier and Uncle Jeg deserve so much thanks. The car was perfect. I can't wait to race again. We've got another round in St. Louis in just a couple of weeks."

Twelve-year-old Kelly also reached the semifinals in her first-ever race in Junior Dragster, which featured a field of 20 cars, including cousins Jack and Clay Coughlin. Kelly beat Kole Sattler, Bayly Russell and earned a bye run before being giving eventual race winner Joseph Bay Jr. a free pass in Round 4 when she red-lighted.

"I was so proud of Kelly," Meghan said. "She did great. You would have never known it was her first race. The look on her face every time she won was priceless. I think we may have another drag racer on our hands."

In Super Gas, T.J. beat Dave Miller, Ray Connolly and Larry Roedel before bowing to Steve Hoyt. In his dragster, T.J. lost to Jerry Mellis in Round 2.

"It was an okay weekend," T.J. said. "It's always good to win rounds. Of course, when you don't end the day in the winner's circle you're never 100-percent satisfied. The cars worked great and I drove okay. The highlight of the weekend was watching my sisters. They reminded me that drag racing should always be about having fun first."

Rounding out the Coughlin clan's weekend at the track was Top Sportsman driver Mike Coughlin, who unfortunately suffered the same fate as his sons Jack and Clay in Junior Dragster, losing in the first round of competition. It was a surprising ending for Mike, who won the national event in Norwalk, Ohio, just two weeks ago.